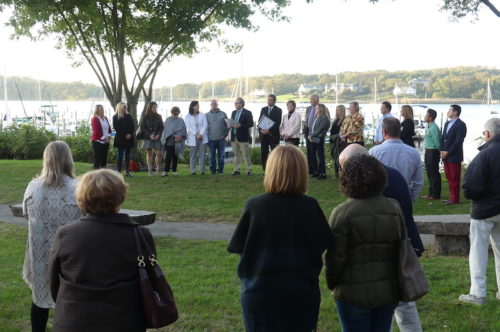 Local officials lined the shoreline of the Navesink River for the park opening. Below, the house that formerly stood on the site, as seen in 2009. (Photos by John T. Ward. Click to enlarge.) More than a decade after it began, an effort to turn prime riverfront property in Fair Haven into a park ended with a ribbon-cutting Tuesday evening.

Dubbed “Williams, Albert and Robards Park” for the successive generations of the family that lived there, the site at the northern end of Denormandie Avenue will now serve as a place for “contemplation,” Mayor Ben Lucarelli told several dozen onlookers at a brief ceremony. 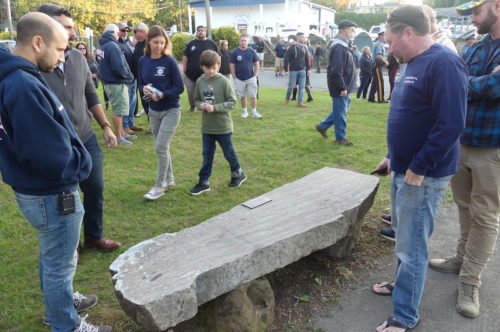 Attendees read the dedication plaque on a bench, one of four donated by friends and families of late borough residents. Below, a plaque at the entrance to the park offers some site history. (Photos by John T. Ward. Click to enlarge.)

The house, built in 1853 by Charles Williams, a free African-American, was acquired by the borough for $1.2 million in 2014, five years after the death of its last resident, Winifred Julia Decatur Robards. She had lived all but two of her 92 years there.

Though a weathered medallion on the doorframe marked the structure as a Century House, borough officials said the house was not historically significant, and too costly to restore. It was demolished in 2015.

Councilwoman Betsy Koch, who followed her late husband onto the governing body three years after his death in a cycling accident, called the park “just spectacular” during the council’s regular meeting Tuesday night.

The benches overlook the 140-foot frontage on the Navesink River, where the American Littoral Society plans to create a living shoreline next spring, Lucarelli said.

According to Councilman Chris Rodriguez, the property is also home to Monmouth County’s oldest and largest yew tree.

The borough’s success in acquiring and converting the site to parkland “would not have been possible” without the leadership of former mayor Mike Halfacre, Lucarelli said at the borough council meeting Tuesday evening.

More than $1 million of the cost was covered by grants from the state of New Jersey, Monmouth County and the private Monmouth Conservation Foundation, said Lucarelli.