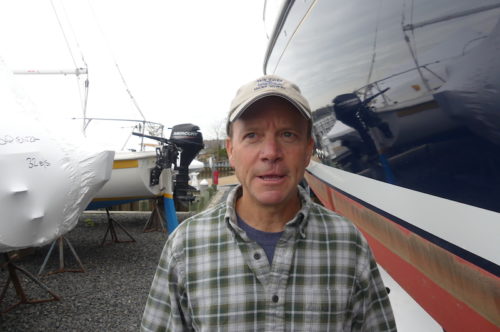 A Fair Haven marina lost the latest round Thursday night in a years-long and increasingly bitter battle with the borough government over property issues.

At a compliance hearing held in Rumson, Judge Thomas J. Smith III found that Fair Haven Yacht Works had not complied with an earlier ruling that it file a zoning application with the town, and upheld a $1,500 fine. 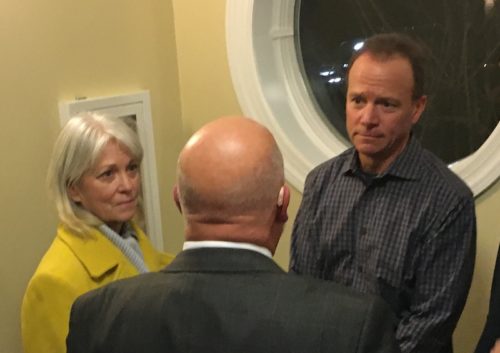 At issue was one of seven zoning violations alleged in July, 2018 by the borough’s code enforcement officer, Nick Poruchynsky, against the marina, located on the Navesink River at the northern end of DeNormandie Avenue.

Some of the purported violations related to a site plan approved by the borough zoning board in 1966, when the marina rebuilt following a devastating fire the previous December. Issues included parking, drainage and boat racks.

Marina owners Jim and Molly Cerruti, who live in the borough, bought the business in 1998.

In July, after two nights of testimony that drew large numbers of marina supporters, Smith dismissed six of the counts as “de mininis,” or minor, and said they appeared to arise from changes made over decades in the normal course of business.

But Smith also found the marina guilty of failing to provide a drainage swale to direct runoff from the property away from DeNormandie Avenue, as directed in 1966. He imposed a $1,500 fine, which he stayed, provided that the Cerrutis apply to the borough to correct the issue within 30 days.

They filed a zoning application for the swale in August, marina attorney Tony Sposaro told the court Thursday. But after a review by an outside engineering firm, at a cost to the marina of $2,392, the borough deemed the application incomplete. It also claimed that in order to make it complete, the marina would have to correct the other six issues that had been the subject of the dismissed citations, he said.

In a letter filed with the court, Sposaro called the borough’s actions “nothing short of outrageous.”  He said the Cerrutis, believing they had fulfilled Smith’s order, withdrew their zoning application.

The Cerrutis claim the enforcement actions constitute harassment, and arise directly from a separate lawsuit filed by the borough in Superior Court against the marina. That dispute, which began in 2015, concerns riparian rights associated with the newly christened Williams, Albert and Robards Park and is pending in Superior Court in Freehold.

The zoning  action “is nothing more than an attempt to exert pressure on us,” for an unknown objective, Jim Cerruti told redbankgreen last week. “It is straight-up harassment.”

Borough prosecutor Anthony Vecchio requested Thursday night’s hearing to ask Smith for an interpretation of his July ruling, and if it obviated the borough’s ability to require compliance with land use law. Seated in the courtroom were about two dozen Cerruti supporters, many of them from the volunteer fire department, where Jim Cerruti serves as president and ex-chief.

Vecchio said the 1966 site plan “was never followed,” and that the marina had over the past 50 years expanded its business “completely outside of the law,” by adding docking slips, eliminating parking spaces and making other changes.

“All the town wanted from the get-go was compliance,” he told the court.

The yacht works’ withdrawal of the zoning application was the equivalent of “never having submitted it at all,” Vecchio said, and the yacht works is  “flaunting the borough’s ability to oversee compliance” with zoning law.

Sposaro argued that Smith’s July dismissal of the six counts should preclude the borough from raising those issues again.

“Bringing us back into court is nothing short of outrageous,” Sposaro said. “It constitutes malicious prosecution.”

But Smith said his prior decision did not, and could not have, barred the borough from its legal right to conduct a “comprehensive review” of land use matters.

“I was not trying in any way to limit the jurisdiction of the zoning board,” he said. “The municipal court is not the place to engage in” interpretations of land use law.

He rejected Sposaro’s request that the fine be waived on the basis that his clients had proceeded in good faith, and gave the Cerrutis 20 days to appeal his ruling.

“Our frustration with the process, the harassment, and the actions of the Mayor and Council is at an all time high,” Jim Cerruti told supporters by email Friday. “What do they want and to what depth will they reach to get it? We are reviewing our legal options.”

No borough officials other than Vecchio appeared to be present at the hearing.

Smith, the municipal judge in Highlands, was sitting in for Fair Haven’s judge, Peter Lucas, who was conflicted out by virtue of being appointed by the borough council. Fair Haven utilizes Rumson’s courtroom as its own.

(redbankgreen plans to take a closer look at the dispute between the borough and the marina in coming days.)