A view of the north side of the proposed Shrewsbury Manor at Allen Place. (Rendering by Michels & Waldron. Click to enlarge.)

A plan to build 10 new apartments on the site of a Victorian house won approval from the Red Bank planning board Monday night.

The applicant also garnered praise from the board chairman for not pushing for more. 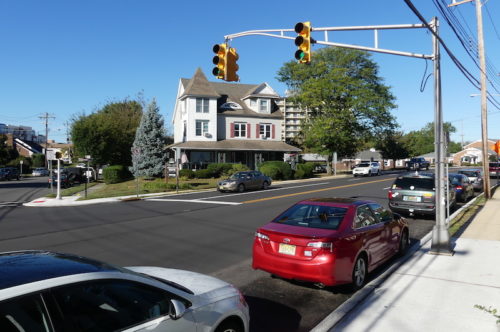 The apartments would replace the Victorian structure at 63 Riverside Avenue. (Photo by John T. Ward. Click to enlarge.)

The plan, by the Philip J. Bowers & Company would replace homes and garages at the corner of Riverside Avenue and Allen Place with a new two-story building containing 10 units.

Most prominent among the structures to be demolished is a Victorian-style former residence that serves as the home to the Marks & Klein law firm, at 63 Riverside Avenue. The Bowers firm acquired that property and another for a total $1.35 million in the past year, according to records filed with the Monmouth County clerk.

A two-family home on the abutting property on Allen Place and a string of garages would also be removed.

The garages were once offered as a convenience to tenants of the 59-unit Shrewsbury Manor apartment complex, also owned by Bowers, on the opposite side of Riverside Avenue. But because of an increase in auto sizes, they’re “completely unusable” for storing contemporary vehicles, said Nicola Bowers Metzheiser, a principal in the family-owned firm.

Instead, 28 of 50 planned parking spaces would be provided for those tenants, with 20 others reserved for residents of the new structure, dubbed “Shrewsbury Manor at Allen Place.” The remaining two spots are reserved for a third party under an easement.

Architect Robert Waldron told the board the new structure would be clad in red brick, with bay windows, dormers and an “old-school, sloped roof” in slate gray.

“The most beautiful part of the design is that there is no entry and no exit” on busy Riverside Avenue, said Mayor Pasquale Menna, referring to the plan’s elimination of four curb cuts, reducing the site total to two. Vehicles would access and leave the site via driveways on Allen and Morford Place.

Jennifer Stewart, of Morford Place, the only borough resident to comment, praised both the plan and the Bowers family. She said they had already helped resolve a long-term flooding issue on Allen Place, and agreed to install a fence to reduce pedestrian cut-throughs.

The apartment plan “will improve our property immensely,” she said. The corner house, she said, “is kind of falling down, not because they don’t maintain it, but because it’s old. It’s just old.”

Board Chairman Dan Mancuso commended the Bowerses for not seeking more units.

“Easily, anyone else would have tried to make it four stories and abandoned the [garage] spaces used by Shrewsbury Manor,” he said. “They did neither of those things. They came in with what I believe is a very good application.”

Though board member Juanita Lewis hesitated, voicing reluctance because of the demolition, she joined the rest of the board in unanimous approval.

Here are the relevant documents.