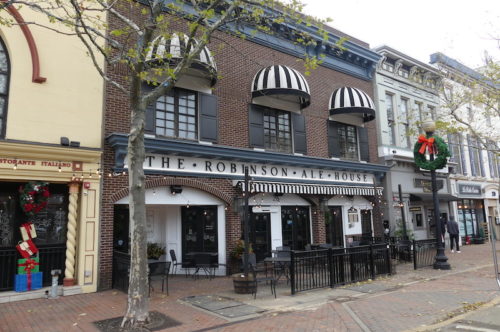 After seven years as a tenant, Tim McLoone has bought the building that houses his Robinson Ale House restaurant in Red Bank.

Earlier this week, redbankgreen caught up with 73-year-old restaurateur by phone as he rode a bus to Camden for one of 22 Christmas concerts he and his charity band, Holiday Express, have scheduled this year. McLoone and the Shirleys performing at a festival in Red Bank in 2017. (Photo by John T. Ward. Click to enlarge)

Last month, through a limited liability company, McLoone bought the building for $3.5 million, according to property records. The deal came 20 months after the COVID-19 pandemic forced McLoone to lay off more than 700 employees across 11 restaurants he owns in New Jersey.

So what does the purchase say about the state of his business, the success of Broadwalk experiment downtown and the pandemic-era economy more broadly?

The purchase was driven by several factors, McLoone said, including the approaching end of a lease on space in Shrewsbury that serves as the back-end office for his restaurants. He plans to move the office, comprising about a dozen employees, by March 1, taking all the available space.

Another “big piece,” he said, was the fact that the Rum Runner site in Sea Bright was the only other property the restaurant group owned, and “just to be fiscally sound, it’s good to have assets.”

“The business has been very consistent there, from the minute we opened, so we don’t have to worry about it being as seasonal as our other places,” he said.

He’s “more than grateful” that the borough shut down the north end of Broad Street for the past two summers to spur business during the pandemic, he said.

“Broadwalk’s the greatest,” McLoone said. “The only problem with that is that it helps some more than others, but I know everybody’s working on it. And I think that all the people over the years who kept talking about making Broad Street a walking mall are now kind of vindicated.”

McLoone said the $15-per-hour minimum wage he adopted in May for non-tipped employees is working to lure back reluctant employees, though it’s too soon to tell if it will slow turnover.

The wage issue, he said, forced him to acknowledge that he “inadvertently became part of sort of an abusive system, where we relied on underpaid help to try to make money, and that the business model for restaurants was too dependent on people who could not make a living wage,” he said.

“I’m not trying to come off as some proverbial do-gooder, but that’s the truth: we were living off of them, and not doing great, by the way,” he said. “So it’s not like the model was wrong from a financial standpoint, but it was wrong from a humanistic standpoint.”

Now, with worker shortages, “for the first time, the lowest-paid in the United States have leverage. And good on ’em.”

The increased minimum required him to boost wages across the board, so that “everybody got more,” he said, but the bottom line has begun to improve after a slow start, he said. And more increases will be needed in the industry “in order to get people to buy into this lifestyle,” which requires dealing with pressure, customer complaints and more.

Where are we in the recovery, assuming the omicron variant doesn’t undo recent gains?

“I think we’re probably 85 percent of the way back,” he said. “I run into people all the time who tell me, ‘this is my first time out in a restaurant.’ We still hear that…. But it seems like we’re at least heading to where this is more mundane, if the holdouts would just get vaccinated.”