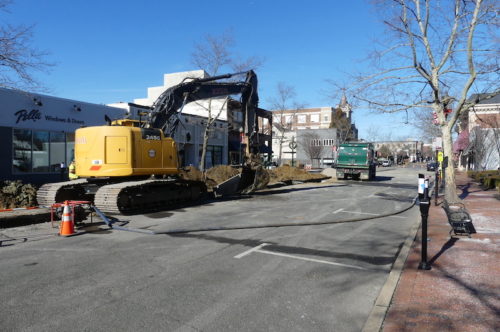 Broad Street in Red Bank will get a new, $1.3 million water main, following council action to expand a $2.7 million sanitary sewer project that has disrupted downtown traffic for the past three months.

And property owners won’t have to pay thousands of dollars to replace their water connections, as some had feared.

At its semimonthly meeting Wednesday night, the borough council initiated a plan to spend $1.18 million – the town’s full allotment of grant money from the federal American Rescue Plan Act of 2021 – plus $113,000 in available surplus from water and sewer accounts, to replace the 8-inch main.

The council, reduced to five members by the January 19 resignation of Erik Yngstrom, voted unanimously to appropriate the funds, and to give the work to Montana Construction.

The Lodi firm has been replacing the sanitary sewer line between Front Street and Harding Road since November, and won the added contract without bidding  “in the interests of economy and efficiency,” according to a resolution.

The spending plans also call for the borough to absorb the costs of connecting the main to individual properties at the curb line.

Previously, commercial property owners, represented by business district manager Red Bank RiverCenter, were alarmed to learn that their connections might need replacing, at their own expense, as early digging on the project unearthed an estimated 65 to 100 galvanized steel pipes that were leaking or nearing failure.

The average replacement cost was estimated at $5,000 to $7,000, consulting engineer Laura Neumann of CME Associates told the council in December.

But after at least one closed-door executive session to discuss possible litigation, the council agreed the town should absorb the costs.

“Municipal code calls for the services to be replaced up to the curb stop at the borough’s cost when the main is upgraded,” acting Business Administrator Darren McConnell told redbankgreen last week that.

The portion from the curb to the building is the responsibility of the property owner.

RiverCenter executive director Glenn Carter, who had previously invoked the adage “you broke it, you fix it” in urging the council to pick up the cost, said the organization is satisfied with the outcome as “consistent with River Center’s recommendations.”

It remained to be determined whether the borough “will require or strongly recommend that the property owners replace the water service between the curb stop and the meter inside the building,” Carter told redbankgreen last week.

But now “is the right time to get all this done and not have to open Broad for years or even decades to come,” he said.

McConnell told redbankgreen recently that work on the water line will begin “as soon as the contractor can obtain all the required materials.  We do not yet have a lead time on that.”

At the council’s January 12 workshop session, Neumann said final paving of the street could occur in July. The project had previously been expected to wrap up by the start of summer.

Separately, and without discussion, the council approved a $222,000 contract with Montana to cover the cost of improvements to the sanitary sewer at Hudson Avenue and Canal Street. The need for the work came to light in connection with the Broad Street project, according to the text of the resolution.