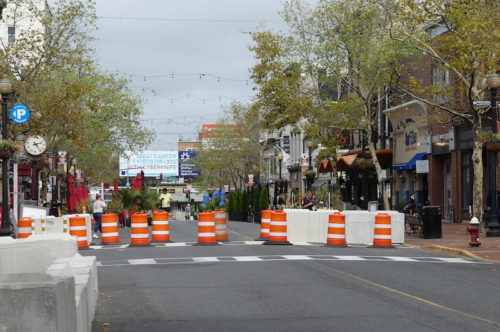 But while Red Bank RiverCenter and many business owners say the mid-street, car-free promenade has succeeded in attracting customers over 18 months of pandemic, others say it has hurt them. 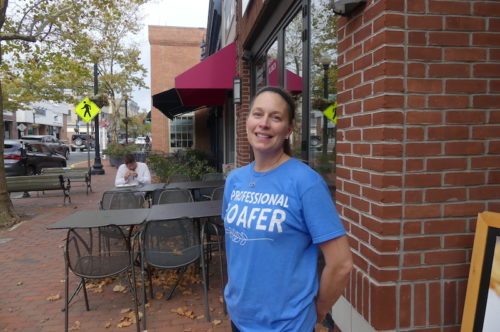 Michele Ellis, who opened Great Harvest Bread Company almost a year ago, opposed continuing the Broadwalk endeavor as unfair. Below, Zaitooni restaurant, center, is penned in by Broadwalk barricades on two sides. (Photo by John T. Ward. Click to enlarge)

After a rollout amid the COVID-19 pandemic in June, 2020 followed by a winter closure, the plaza returned in late April, with an expiration slated for September 30.

Making the case for an extension to the borough council last week, RiverCenter executive director Glenn Carter said the shopping and dining promenade had been “a tremendous success, creating spillover effects of a more festive atmosphere and foot traffic” to benefit businesses both inside and outside the zone.

The continuation was needed, he said, because restaurants were “still seeing tremendous resistance to dining indoors” in the pandemic.

Under that $2.4 million project, the borough plans to replace the sanitary sewer beneath Broad Street from Harding Road to Front Street. A streetscape project that includes new traffic-calming sidewalk bump-outs and the installation of retractable hydraulic bollards to allow for street closures at White, Mechanic and Front streets is expected to follow, with completion in 2022.

The bollards comprise about $100,000 of the expense, consulting engineer Laura Neumann said recently.

The Broadwalk extension request won backing from representatives of Catch 19 restaurant and women’s clothing retailer D’Or L’dor, both located within the zone, and Red Tank Brewing, located about a half mile away on Monmouth Street.

But Michelle Ellis, whose year-old Great Harvest Bread Company is located two blocks south of the Broadwalk zone, said the extension compounds an existing unfairness, drawing potential customers away from her eatery.

Worse, she said, is that it runs right into the expected start of road construction, the first phase of which runs from Harding to Monmouth Street.

The disruption will eat up a good portion, and possibly all, of the holiday shopping season, Ellis told redbankgreen.

“To put us in a position where we’re sectioned off from Broadwalk, and then to go right into construction and be affected by the holidays – they’re not affected by it,” she said, referring to businesses in the zone.

Decisionmakers, she said, were “really disregarding this section of town. We have to help everybody.”

Nicole Caivano, a landlord and owner of Mustillo’s gown shop, one of Broad Street’s oldest businesses, also pushed back against the extension, though her property is located within the Broadwalk zone.

“I feel like it’s very extensive,” she said, and keeping the street shut down to traffic seven days a week, 24 hours a day, hurts “daytime” businesses that rely on foot traffic.

“I’m there every day,” she said, and with the street closure, “the town is empty.”

Soul Sandwich owner Steve DeAngelo told redbankgreen recently that Broadwalk should be limited to Friday nights and all-day Saturdays. “I’m not against it,” he said. “I’m for everybody doing well.”

Among those hard hit by the shutdown is Zaitooni Deli, on Mechanic Street, which for months has been penned in by barricades at either end of the block on which its located.

“Last year, I totally got it, when there was no indoor dining,” he said. Now, with the planned installation of retractable bollards, “you’re talking about changing the town permanently, and I think a lot more thought should go into it.”

During council discussion of the request, residents voiced concerns about litter, noise, traffic, “aesthetics” and the disadvantages imposed on businesses outside the zone. Councilman Michael Ballard cast the only ‘no’ vote on the extension.

Creating Broadwalk “we did a noble and grand thing,” he said. “But that was when there were no cars on the streets” because of the pandemic.

“As much as it has helped a lot of the businesses in that area that’s blocked off, it has hurt so many other people,” Ballard said. “To just extend it 30 days is to not give credence to those people who are really experiencing hardship.”

Councilwoman Kate Triggiano, however, said the extension had the backing of RiverCenter as well as that of a committee that included both business owners and residents.

“I do believe that there is improvement to be made on this experiment,” she said. “But I do also believe that it has increased the foot traffic of our town, and it has supported and helped the overall economy of Red Bank.”