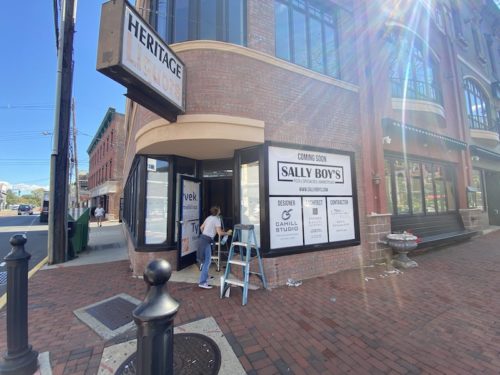 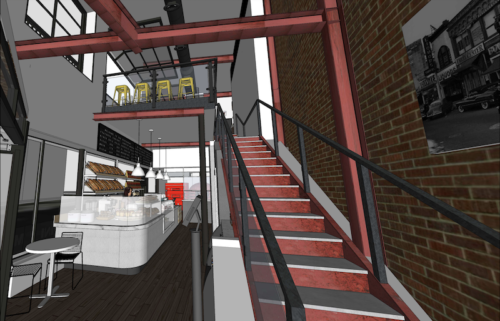 • Sally Boy’s, a “pizza and specialties marketplace,” according to its splash page, has begun buildout in the shoehorn-shaped, two-story building at 1 Broad Street, on the corner of East Front Street.

The restaurant “will be pizza-centric, but also offer a variety of salads, sandwiches, grain bowls, coffee, fresh-made pastries and a coffee/espresso bar,” director of operations Jeff Sisco tells Churn. It will be open seven days a week, breakfast through dinner, he said.

The interior design, by Cahill Studio, calls for creating a loft-style seating area on the second floor, where giant, garage-door-style windows will be installed.

A publicist for the business said Sally Boy’s “is set to open holiday season 2021.”

The building was home for many years to Heritage Liquors, whose sign still hangs above the door, seven years after it closed.

In 2019, under then-owner Athans Bozinos, the building’s exterior got a makeover, in preparation for the opening of a taco shop. But that plan never went through.

A filing for Sally Boy’s LLC with the New Jersey secretary of state’s office identifies its members as Salvatore Basile of Freehold and David Cantin, no residence given.

A notice of settlement filed with the Monmouth County Clerk in September indicates a planned sale of the property to O&D Broad Street RB LLC, in which Dave Cantin is named as member, with a business address at Rockefeller Center in New York City.

Owners John Marchetti and William Rivera pitch their business as “one of the first public, upscale, retail ‘tasting room’ concepts where customer can purchase CBD and consume it in the same location, alongside our cigar smoking clients.”

The shop, at 3 East Front, was vacated a year ago by clothing boutique Theo.

• OceanFirst Bank is closing its branch at the corner of Broad Street and Reckless Place on January 22, according to a notice on the door. Accounts will be transferred to a branch on Route 35 at Oak Hill Road in Middletown.

The financial services company has a headquarters in Red Bank, at the corner of Maple Avenue and West Front Street.

In June, Chase Bank vacated 32-34 Broad Street, where a branch that had closed early in the pandemic never reopened. The space that remains vacant.