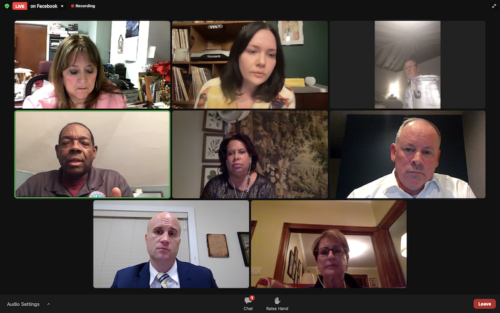 At one point, Council President Kate Triggiano, who chaired the session in the absence of Mayor Pasquale Menna, thanked her colleagues for the “thoughtful conversation” following discussion of an issue.

•  The council agreed, unanimously, to add a water main to the already started Broad Street sanitary sewer and streetscape project.

As reported Thursday by redbankgreen, the addition will increase the cost of the project by $1.3 million, to a total of nearly $4 million.

• Introduced an amendment initiated by Councilwoman Jacqueline Sturdivant to undo portions of a 2018 ordinance that granted limited hiring authority to the borough administrator.

redbankgreen will have more on this in an upcoming post.

• Appointed Robert Swisher as part-time chief financial officer for $1. Swisher’s firm was already serving as acting CFO, but his latest appointment is not seen as permanent.

• Prompted by Cedar Avenue resident Sue Viscomi, discussed the status of a legal opinion it asked for more than year ago regarding an August, 2020 email leak.

Under a resolution adopted in December, 2020, private attorney Barry Cooke was to have advised the council on whether it should commission an independent investigation into the leak, more fully described here.

“We do not have a report on that, so we don’t have any findings,” said Acting Business Administrator Darren McConnell.

“We need closure on that,” said Councilman Michael Ballard.

It’s not clear when, if ever, Cooke plans to complete the assignment, and if the public will learn what it says. Last February, borough Attorney Greg Cannon told redbankgreen that the the report “will be an attorney-client privileged document, not subject to OPRA [New Jersey’s Open Public Records Act] or public inspection.”

• McConnell reported that the police department, where he serves as chief, was still awaiting the delivery of police body-worn cameras owing to a manufacturing backlog.

• Read proclamations honoring Laura Kolodziej and Nancy Pape, who were named Governor’s Educators of the Year 2021-’22 for the borough primary and middle schools, respectively. The council also cited Liliana Carvajal for her designation as the district’s Educational Services Professional of the Year.

Two matters the council did not discuss:

• The future of the Redevelopment Agency. The agency hasn’t met since September; did not adopt a meeting schedule for 2022; doesn’t have a chairman; has two vacant seats; and has been targeted for elimination by Sturdivant.

• Who might fill the vacancy created by the January 19 resignation of Erik Yngstrom from he council.