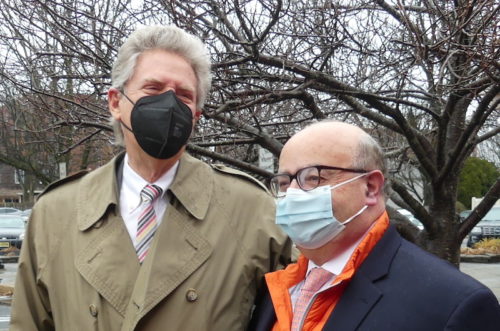 The order, which could come as soon as Thursday, was motivated by “the pain that is being felt in our community,” Menna said at the monthly council workshop Wednesday night.

The order is expected to mirror one that took effect Friday in Asbury Park. That mandate, while exempting children under the age of three, says:

Employees and patrons of these facilities must wear a facemask at all times except when actively eating or drinking or when socially distanced at least six feet apart from all others for an extended period of time, such as in an office setting when seated at desks; when performing for an audience; or when conducting worship services.

The aim is to reduce the spread of the virus and “keep people out of hospitals to minimize the strain on our healthcare system and potentially save lives,” Mayor John Moor said at the time.

While Governor Phil Murphy said earlier this week that he would not reimpose a statewide mask mandate, Red Bank would join a growing list of New Jersey municipalities that have acted to do so.

Newark, Jersey City, Hoboken and New Brunswick have adopted mask mandates in recent weeks, as have smaller municipalities, including Morristown and Montclair, according to NorthJersey.com.

New COVID-19 infection totals have been rising at rates seen early in the pandemic, and while the omicron variant of the virus is significantly less lethal and than earlier variants, it is landing record numbers of patients in hospitals.

As of late Wednesday, 5,933 beds in New Jersey’s 71 hospitals were being used by COVID-19 patients, with 547 of them on ventilators, according to the New Jersey Health Department.

Since December 2, Red Bank’s cumulative infection total since the pandemic began has soared by 33 percent, to 2,638 cases as of Monday, according to Monmouth County government.

Menna cited “the covid numbers, and the pain that is being felt in our community,” in calling for masks.

All six council members informally endorsed the move, including Councilman Ed Zipprich, who said he had lost two in-laws to the pandemic.

“I think if we’re really going to nip this thing in the bud, we all have to take a proactive stance,” he said.

The order won’t have sharp teeth, though.

Interim Business Administrator Darren McConnell, who also serves as police chief, noted that “there’s no enforcement arm for the police department to enforce this, so I would just recommend the onus be put on the location and not the government to enforce that.

The mandate came up during a council discussion begun by Councilman Michael Ballard, who called for a temporary end to public gatherings at borough hall, without shutting the building down for daily operations.

The council has not met indoors in person since March, 2020. But last summer, the planning board and zoning board, which are autonomous, and the Historic Preservation Commission resumed in-person meetings in the council chamber. For its first two meetings, the newly empaneled Charter Study Commission also met in person.

All have now agreed to conduct meetings via Zoom through February, officials said.