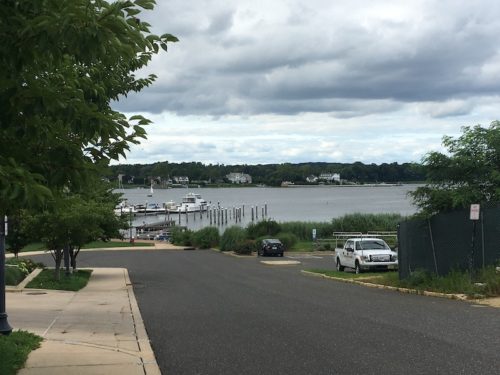 A municipal boat ramp on the Navesink River was once envisioned for the north end of Maple Avenue, now a nature area called Maple Cove. (Photo by John T. Ward. Click to enlarge.)

Red Bank officials boasted earlier this month that they’d “cobbled together” about $1 million from idle accounts to soften the impact on taxpayers of repairing the long-shuttered Senior Center.

It turns out a big chunk of that sum has been stuck in the borough’s sofa cushions for 30 years, designated for a never-built boat ramp, redbankgreen has learned. 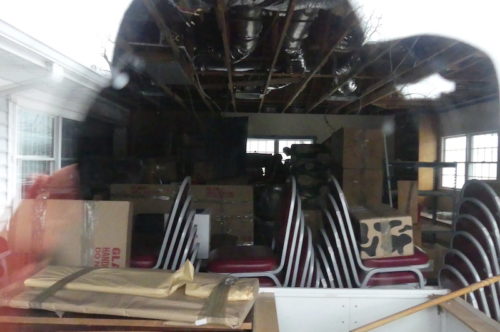 The interior of the damaged Senior Center as seen through a window in January, 2021. Below, the 2006 Waterfront Plan discussed the challenges to creating “physical access” to the riverfront. (Photo by John T. Ward. Click to enlarge.) 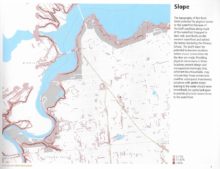 Up for adoption when the council meets Wednesday night is a bond to cover about half the nearly $2 million cost of repairing the Senior Center. The one-story building on Shrewsbury Avenue has been out of commission since it sustained damage from a rupture in the fire-suppression system three years ago.

The other half is money from various idle accounts. Interim Business Administrator Darren McConnell told redbankgreen last week that the funds include surpluses from completed projects, as well as money set aside for “projects that were contemplated in the past, but have not come to fruition.”

For example, there’s $20,000 left from a $30,000 allocation from 2017 for preliminary expenses related to the public works facility on Chestnut Street. After the cost of a site survey, “there have not been any further expenditures and the funds are no longer required in order for the project to eventually move forward,” McConnell said.

“You found over a million dollars in funds that come from funds like old road programs, where we didn’t use the entire amount, so it’s sitting in there, available to us,” Councilman Michael Ballard told McConnell and interim chief financial officer Bob Swisher at the February 9 council workshop session. “I’m appreciative, and I hope taxpayers are appreciative.”

Those funds “keep us from having to sort of hang the whole nut on the taxpayers of Red Bank,” said Councilman Ed Zipprich.

The biggest single piece of the found money is $196,667.40, according to a resolution cancelling reserves adopted by the council.

But it’s actually much older money. Five years earlier, the balance, then estimated at $210,000, had been sitting idle “for at least 13 years,” redbankgreen reported in 2008.

Then-Borough Administrator Stanley Sickels told redbankgreen at the time that the funds had been paid by Riverview Medical Center around 1992, when the town ceded rights to a public dock at North Washington Avenue, now part of the hospital complex.

McConnell, a 33-year employee of the police department, which he serves as chief, said he and Swisher could not find documentation linking the fund to a payment from Riverview, but “I do vaguely recall that having been the case back thirty years ago,” he said.

Participants in a public hearing in April, 2006, told the consultants who authored a Waterfront Plan published nine months later that a boat ramp would be nice, particularly in the area of the primary school. Other “desired facilities” along the Navesink River included a pier, a small boat house and a “waterfront transit system,” the report by he planning firm Wallace, Roberts & Todd said.

But finding a place to site a ramp would be a challenge, they wrote, citing steep bluffs along much of the waterfront.

“Locations with gentle slopes leading to the water should more immediately be capitalized upon to provide physical connections to the waterfront,” it said.

Now, in light of the fact that no ramp has been built,, “in resetting our priorities and attempting to minimize the current impact on taxpayers, a decision was made to re-allocate those monies towards the Senior Center improvements,” McConnell said.

Neither Ballard, who was chairman of the finance committee in 2019 and 2020, nor Zipprich responded when asked by redbankgreen to comment on the use of the funds to fix the Senior Center.

Cindy Burnham, a former council member who once advocated for a boat ramp at Maple Cove, a nature area she championed at the northern end of Maple Avenue, is untroubled by the diversion. The cove is used as a launch for canoes, kayaks and paddleboards.

“I think the only place [a ramp] can go is in Marine Park, and there have been no residents or borough officials who have tried to push the issue,” Burnham told redbankgreen by email.

“Using that money to fix the senior center and not to add to the tax burden of the Red Bank residents is a good thing,” she said. “A boat ramp is a want and the senior center is a need, and although having a boat ramp would be fantastic in Red Bank, we will probably never see it happen.”