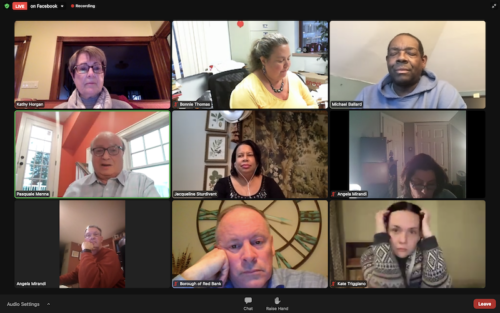 A screen grab from Wednesday’s council meeting. (Photo from Zoom. Click to enlarge.)

Red Bank’s mayor and the so-far only contender for his job squared off Wednesday night at yet another contentious borough council meeting. Adrienne Bilaal, seen here in 2017, was appointed to the Housing Authority after a dispute having nothing to do with her. (Photo by John T. Ward. Click to enlarge.)

The sparks flew early in the Zoom session, when Mayor Pasquale Menna hesitated over a proposed appointment of Adrienne Bilaal, of Pearl Street, as “the Governor’s Appointee” to the Red Bank Housing Authority, which manages the Montgomery Terrace and Evergreen Terrace subsidized housing complexes.

“In 30 years, I’ve never seen this type of appointment,” Menna said. “If it’s the governor’s appointee, why are we passing a resolution?”

“If they want a letter from me, they should send a request to me,” Menna said, adding he would be happy to do so, but that he had not spoken to Bilaal about the matter and didn’t know if she was interested in the appointment or “the best candidate.”

Ballard said the protocol was the same followed in the appointment of former Republican Chairman Michael Clancy to the authority. Menna said in that case, the governor’s office had contacted him and he had reviewed Clancy’s resume and spoken to him to determine he was qualified.

[UPDATE: Former housing authority member Mark Gregory told redbankgreen Thursday that he, not Clancy, had been a governor’s appointee. According to an archived press release from the office of then-Governor Chris Christie, Gregory was a “direct” appointment to the agency in November, 2017. According to his recollection, Gregory “did not have any interaction with the Council regarding my appointment.” Council meeting minutes show Clancy was appointed by the council in January, 2016. Both Clancy and Gregory no longer serve on the authority.]

Councilwoman Kathy Horgan twice asked Ballard who had been contacted by the governor’s office, but he ignored her.

“What supporting documentation do you have, Michael?” she asked.

“He doesn’t have any, that’s the answer,” said Menna.

Councilman Ed Zipprich said the position has been vacant, and Ballard reached out to the governor’s office “to find out how this is handled,” and was following their direction.

“Are you suggesting I’m not telling the truth here?” Ballard asked. “I don’t know what you have against Ms. Bilaal.”

The council voted to approve the appointment, with Horgan abstaining.

Later in the session, Ballard apologized to Bilaal for “having to go through that. It was never my intention to put you through such a rigorous examination.”

With the endorsement of the Zipprich-led local Democratic organization, Ballard is seeking to unseat Menna as mayor. On Sunday, Menna told redbankgreen he had not yet decided whether to mount a primary campaign with the aim of winning a fifth four-year term.

• The council formally agreed that Barry Cooke, the attorney engaged in December, 2020, to look into an explosive email leak, was AWOL and should be replaced.

Cooke was contracted, for up to $7,500, to opine on circumstances surrounding internal emails alleging that Zipprich was interfering in the award of a trash contract five months earlier. The correspondence was provided to redbankgreen, which reported its contents.

Zipprich denied the allegation, and demanded an investigation into the leak. His opponents on the all-Democrats council had no issue with the leak, and said a probe should focus on his alleged actions. The same split was evident Wednesday night.

But Cooke, a personal injury lawyer with the prominent Wilentz, Goldman & Spitzer firm, never submitted a report, or a bill, and did not respond to multiple outreaches for updates, said interim Business Administrator McConnell.

“Has anybody heard from this guy?” Ballard asked. “Does he even exist?”

“Regretfully, I have not received a reply, except for a communication over four months ago, when I was pushing it, that evidently he had been unsuccessful in speaking with certain people,” Menna said. “Sadly, and I say this with pain, because I’m trying to choose my words, I am dissatisfied.”

“You recommended him, mayor,” Ballard said. “It is very disappointing that an attorney of such prestige would simply not do the job.”

Acting on an earlier consensus expressed by the council at a workshop session, McConnell said he had already informed Cooke that the engagement was terminated, and Cooke had acknowledged receipt of the message.

The council is expected to consider potential replacements at a future meeting.

“It’s never going to go away until we get closure,” Ballard said.

• The council also awarded a contract for a makeover of the East Side parking lots to Z Brothers Construction. The Sayreville company submitted the lowest of five bids for the job, at $631,000.

No, the firm has no connection to former business administrator Ziad ‘Z’ Shehady, McConnell told redbankgreen.

• Not on the agenda: a resolution to appoint Laura Reinertsen as borough clerk. McConnell told redbankgreen a special meeting will be held March 28, when the council is expected to vote on a salary ordinance revision to accommodate Reinertsen’s $105,000 salary.

Reinertsen, who serves as administrator and borough clerk in Kenilworth, in Union County, would succeed Pam Borghi, who retired last month.

Effective March 31, Reinertsen has resigned as administrator and borough clerk in Kenilworth, in Union County, according to a news report.