Three men have been charged with assaulting a 16-year-old Red Bank athlete in what he claimed was a racially motivated attack outside a party in Oceanport last month.

Police, however, made no allegation of racial bias in complaints filed June 10 and obtained by redbankgreen Friday.

Among those charged were two Red Bank Catholic High School football players, including Alex Brown, the quarterback who made national headlines for his onfield performance just a day after his mother died last November. 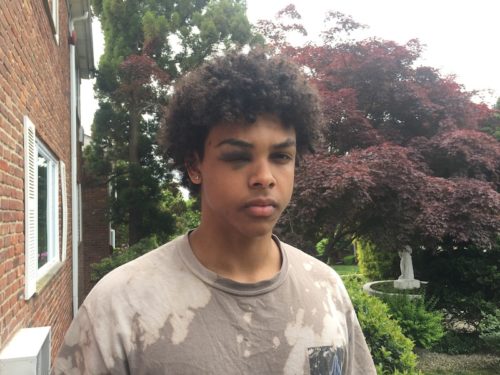 In the incident, Raymond Jackson, 16, of Spring Street, suffered a bone fracture above his right eye that required the surgical implantation of a plate, according to the charging documents. He also suffered a concussion, his father, Ray Jackson, told redbankgreen last month.

The younger Jackson, a sophomore who transferred to Red Bank Regional High from Red Bank Catholic in April, told redbankgreen that the attack took place around midnight on Saturday, May 21, near a home on Pocano Avenue where he attended a party with a girlfriend, who had invited him.

He said he was falsely accused of assaulting a female, subjected to racial slurs, and then attacked by three males several doors away from the party, where he and his girlfriend had gone to wait for a rideshare. The assailants punched and kicked in the face while he was curled on ground, he said.

Charged with third-degree aggravated assault was Jake Jacobson, of Ocean Township, an RBC punter and place kicker. The complaint alleges Jacobson caused “significant bodily injury” to Jackson by kicking him more than once, with at least one kick to the head.

Brown (identified as Alex R. Brown-Eskengren), of Rumson, was charged with simple assault, a disorderly persons offense. Police alleged he pulled Jackson to the ground and repeatedly punched him, resulting in the skull injury.

Also charged with assault, for allegedly pushing Jackson into bushes during the incident, was Anthony Veltri, of Oceanport.

The birth dates of the three defendants were blacked out of the complaints provided to redbankgreen.

The police complaints make no reference to racial bias. Oceanport police Chief Michael Kelly and Detective Gary Grimes, who investigated the case, did not respond to repeated requests for information this week.

Grimes told redbankgreen on May 25 that police had found no racial motivation in the alleged assault. “As far as the racial aspect, that doesn’t appear to be a part of it,” based on accounts provided by others, he said at the time.

Brown’s attorney, Mitch Ansell, said the incident involved no racism, and his his client did not cause Jackson’s injuries.

He told redbankgreen that Jackson, whom he termed an “uninvited” attendee of the party, “got into an altercation” with another male after Jackson assaulted that male’s girlfriend.

Brown, he said, got involved when saw his friend “on the ground and defenseless” while being struck by Jackson. Brown “stepped in, and in defense of his friend, stopped any further assault by Ray Jackson,” Ansell said.

“All that Alex Brown did that evening was come to the aid of a good friend who was in desperate need of help,” said Ansell.

Ansell said police had interviewed more than a dozen partygoers, “and nobody, nobody said” that racial epithets had been used.

Ansell said it was his “understanding” that Jackson would also be charged with simple assault. An Oceanport police records official declined to say if any minors had also been charged, referring the question to the Monmouth County Prosecutor’s Office, which did not immediately respond Friday afternoon.

Jackson’s father has not responded to voice and text messages left for him in recent days.

Brown set an RBC single-game record when he threw for six touchdowns and ran for two more in a playoff win over Morris Catholic at Count Basie Field in Red Bank last November 12.

The feat, coming a day after the death of his mother, Michelle Eskengren-Brown, to cancer, generated headlines nationwide, and won Brown acclaim from the likes of NFL star Tom Brady and tickets to the Super Bowl, played in Los Angeles in February.

Brown, who led the Caseys to a NJSIAA Non-Public B state championship, had transferred to RBC from Mater Dei in Middletown just months earlier, after that school shut down its football program. He graduated from RBC June 1 and is slated to attend Bucknell University in the fall, according to news reports.

Jackson played on RBC’s junior varsity team until he suffered a leg injury in a game last season.