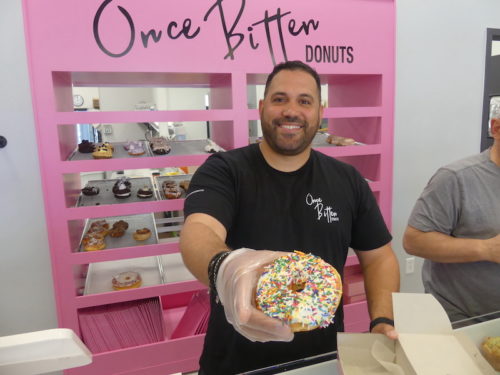 Luis Hurta at the newly opened Once Bitten Donuts on Broad Street. (Photo by John T. Ward. Click to enlarge)

Read all about them in this cusp-of-summer edition of redbankgreen‘s Retail Churn. 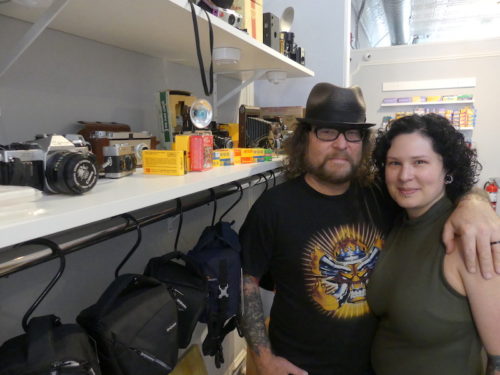 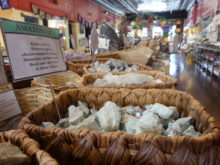 • Earth Spirit New Age Center, betting a pandemic-triggered boom in sales of crystals, candles and more will continue, has relocated to 18 Broad Street.

The 31-year-old business, owned by Chris Midose, had been at 25 Monmouth for the past 17 years. Earth Spirit’s new home is a massive room that features 14-foot-high ceilings and a rear entrance directly from the English Plaza parking lot, as well as a front door on the busiest block of Broad Street.

Last occupied by: Haute Maven, but for more than 130 years was home to a series of shoe stores, culminating with If the Shoe Fits, which closed in 2014.

• Once Bitten Donuts has opened at 86 Broad Street. The shop shares a name with one on Long Island, but this one is solely owned by the married couple Luis and Jim Hurta, and it’s their first retail venture together.

Last occupied by: Alfonso’s Pastry Shoppe, which closed in June, 2020, and before that, Carlo’s Bake Shop. 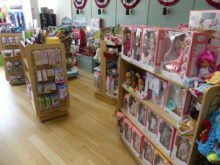 Mira and Bruce Brach created the business after Bruce retired from the landscaping business. An avid toy collector since childhood, Bruce has put some of his most treasured pieces on display for sale, along with new products.

Last occupied by: Currant, a coffee and clothing store.

Cameras? When every cellphone now has one built in? Yes. The market remains strong, said Snell and Gross, a married couple.

“We have actually seen a change where people want to try things out before they buy them,” said Snell.

Gross’s family has owned the Photo Center in Brick Township, one of the shore’s largest camera business, for decades. 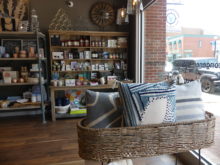 Based in Hoboken, the shop sells home decor and gifts.

Two non-retail businesses have also opened in the downtown district: 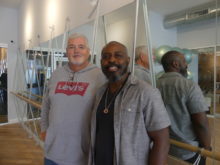 Daniels and Clarkin, of Staten Island, own multiple businesses individually, and Pilates Plus is their first venture together, Daniels said.

Somewhat ironically, when they went looking for space in Red Bank, they quickly found an appealing storefront, and were surprised to learn that it was being vacated by a similar business, Danielle Buccellato’s  Renaissance Pilates. They wound up buying Buccellato’s equipment as well as taking the space, Daniels said.

• Soul Focus, a wellness center, has relocated from Eatontown to 73 Broad Street. 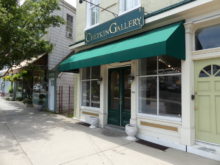 Tracy Hagger acquired the business from Carol Lynn and Don Chetkin and rebranded it with her maiden name.

An immigrant from England who now lives in Colts Neck, Hagger tells Churn she frequently shopped at Chetkin Gallery, and was “quite upset” when she leaned the owners were retiring and planning to close the business. So she bought it, launching her first gallery venture.

Hagger said she plans to rehang the Chetkins’ extensive collection of traditional paintings, which she acquired, and supplement it with contemporary works.

As previously reported by redbankgreen, Denholtz Properties, the town’s busiest buyer of real estate, acquired the building from the Chetkins in December.

• Shedhead Vintage, offering vintage clothes, shoes and accessories from the 1960s through the 1990s, plans to open at 93 Broad Street.

Fired by a passion for environmental sustainability and “keeping clothing out of landfills,” Hallie Endresen and Hailey Grillo started the business online in 2017, when they were still in high school, Endresen tells Churn.

Now, they’re relocating their brick-and-mortar to Red Bank from Avon-by-the-Sea.

• Paris Baguette, a bakery franchise with stores nationally, has plans to open a shop at 128 Broad Street. (Perhaps by opening day they’ll realize that “Red Bank” is two words, not one.)