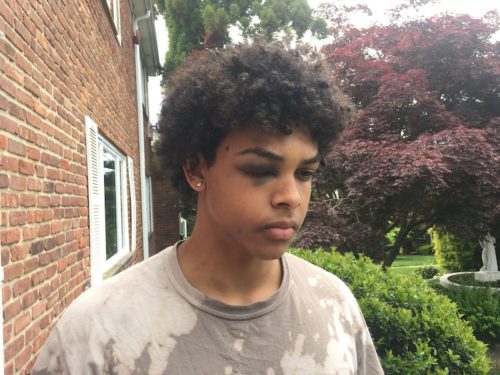 Raymond  Jackson suffered a bone fracture above his eye that will require surgery, his father said. (Photo by John T. Ward. Click to enlarge.)

A 16-year-old Red Bank athlete was badly beaten in a racially charged attack in Oceanport Saturday night, he told redbankgreen.

Police, however, say they have found no racial motivation in the alleged assault, which remains under investigation. 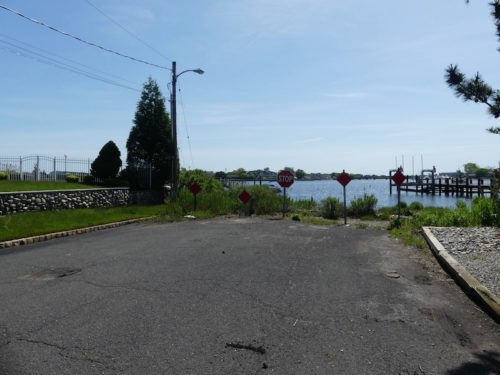 The incident occurred at the east end of Pocano Avenue, the victim said. (Photo by John T. Ward. Click to enlarge.)

Raymond Jackson, 16, of Spring Street, suffered a concussion and a bone fracture above his right eye that will require surgical implantation of a plate, according to his father, Ray Jackson, of Asbury Park.

The younger Jackson, a sophomore who transferred to Red Bank Regional High from from Red Bank Catholic last month, said the attack took place around midnight at the east end of Pocano Avenue, and involved four males. At least two of the attackers were adults, he claimed.

Jackson said the incident followed an accusation during a party that either he or another attendee had inappropriately touched a girl.

Jackson told redbankgreen he’d been at the waterfront house for about 30 minutes and was in a bathroom with his girlfriend, who had invited him, when a male he had not previously met knocked on the door and made the accusation.

“He said his girlfriend said it was either me” or another teen who was present, Jackson said. “I told him, no, I was with my girlfriend the whole night.”

The accuser shoved him, Jackson said. “I didn’t want any problems, so I walked out of the house,” he said.

Jackson, who is biracial, said that as he departed, racial slurs, including the N word, were directed his way by several others.

About 10 minutes later, while waiting with his girlfriend for an Uber ride at the dead end of the block beside Branchport Creek, Jackson said he was approached by the accuser and two local high school athletes he knows. (redbankgreen is withholding the identities of the alleged participants, none of whom has been charged.)

The accuser shoved his girlfriend aside and swung at him, Jackson said, and he struck back. At that point, he said, the other two males punched him from behind in the head. Jackson said he fell to the ground and curled up while the assailants repeatedly “stomped and punched” him.

“I didn’t even get to fight back,” he said. “I was already on the ground, and they were hitting me with their feet and fists.”

The blows struck his face as well as his right femur, which Jackson said he broke while playing junior varsity football for RBC last October, prior to his transfer.

When he attempted to get away, a male in his early 20s shoved him into bushes, Jackson said.

He then got into a car with his girlfriend, who was crying, and waited until the Uber arrived, he said.

Jackson said he was “embarrassed” to have been beaten and did not immediately report the incident to police or tell his mother, with whom he lives. He went to the police with his father Monday.

Oceanport Detective Gary Grimes told redbankgreen Wednesday that the department was investigating the reported assault, and had consulted with the Monmouth County Prosecutor’s Office about the case.

“But as far as the racial aspect, that doesn’t appear to be a part of it,” based on accounts provided by others interviewed by police, Grimes said. He declined to provide more detail.

Via text, Jackson expressed outrage at the claim.

Jackson’s father said he believed Grimes “is doing the best job he can,” but “how do you say it’s not a bias crime?”

Moreover, he said, his son’s injuries make it “clear cut” that “a violent crime has been committed.”

“I’m lucky to still have my son breathing where I can hug him,” he said. “I’m thankful not to be making funeral arrangements, or sitting at his bedside with a vent on him.”

The elder Jackson said police told him no home security video was available from nearby homes.

redbankgreen was unable to reach three of the accused, and the fourth declined comment through a parent.

Jackson, who had just returned home from a visit to a surgeon in Lincroft when he first spoke to redbankgreen Tuesday, said the doctor told him the surgery on his eye socket can’t be performed before the swelling subsides.

Meanwhile, “I want answers,” the elder Jackson. “I want people held accountable for their actions.”