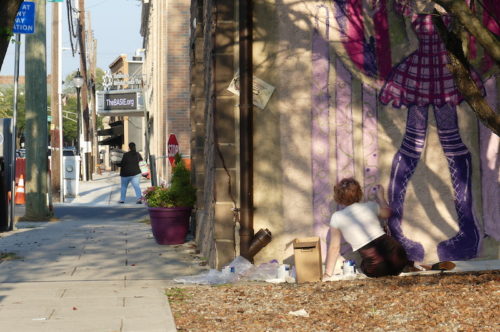 A mural promoting the Indie Street Film Festival, painted on the side of a Broad Street building in 2018. (Photo by John T. Ward. Click to enlarge.)

Except to ensure that the proposed murals don’t include business names, the reviews will not focus on content in order to avoid First Amendment issues concerning free speech, he said.

“The idea is not to pass judgment on art,” Shehady said at a workshop meeting in July. Rather, the idea is to make the review process “uniform, so one person doesn’t feel like the decision [on an application] was arbitrary.”

At present, requests for murals and public art go directly to the mayor and council, which frequently requests additional information.

The focus of the review process, Shehady said, will be on such issues as landlord permission when art is proposed for display on private property and liability insurance when it involves public property.

Asbury Park, Maplewood and New Brunswick, among other New Jersey towns, have mural review ordinances in place, he said.

At the July meeting, Councilman Michael Ballard raised a concern about “offensive or profane or obscene” images or messaging being displayed.

“The definition of what is offensive is rather tricky,” said Mayor Pasquale Menna. “Hate speech or hate depictions” would not be permitted, but First Amendment rights would be respected, he said.

An ordinance formalizing the review process is expected to be introduced at the council’s September 25 meeting.