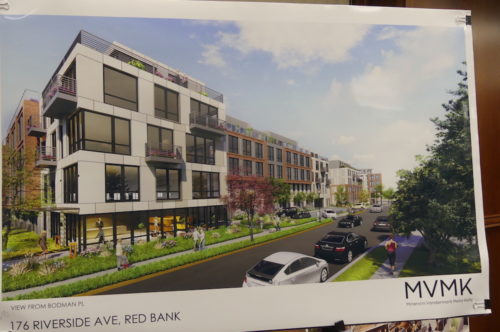 A rendering depicts the Bodman Place side of the proposed apartment project. (Photo by John T. Ward. Click to enlarge.)

The fate of one of the largest development plans in Red Bank history remained unresolved Monday night.

At the fourth planning board hearing on the 210-unit apartment complex proposed for the site of the former VNA headquarters, attention centered largely on the wisdom of putting a public plaza on busy Riverside Avenue. 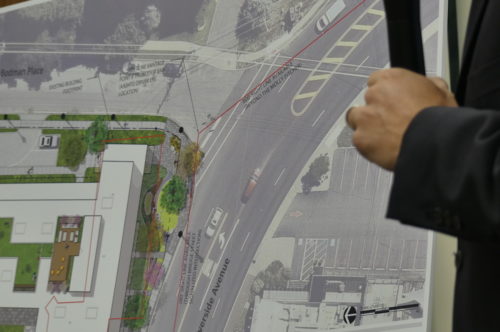 The proposal, by developer Saxum Real Estate of Parsippany, would replace the former VNA headquarters at 176 Riverside with a 210-unit apartment complex in two new buildings.

The structures would be erected around three sides of a parking lot belonging to the Colony House apartments, located on the opposite side of Bodman Place.

As part of a site redevelopment plan adopted by the borough council in December, Saxum would provide 32 units of affordable housing. (See below for links to key documents.)

The hearings, which began in July, have been well-attended, with numerous residents of apartments and condos and apartments along Bodman Place turning out to question Saxum experts on traffic safety and other matters.

Saxum’s landscape architect, David Lustberg, said Monday night that the new building would be set back farther from Riverside Avenue than the VNA structure. At the corner of Bodman Place, the space in between the building and road would include a landscape island, a planting bed, trees, concrete benches and “pebbles,” or large concrete seats shaped like smooth stones.

Board member Lou Dimento asked Lustberg whether the plaza shouldn’t be further north on the site, closer to the Navesink River, “instead of right next to a major highway.” Riverside Avenue doubles as state Route 35.

“This is a golden opportunity” to fulfill one of the borough Master Plan’s objectives to draw recreational use to the river, DiMento said.

It’s “counterintuitive,” he said, but “the more people, the more activity you see on a street, the safer that street becomes.”

Residents, however, found it hard to accept the idea of a seating area sited on a curve in a busy four-lane roadway.

“I just think it’s a horrible place for it,” said Beth Lucas, who witnessed a June, 2017 accident in which an SUV plowed into the VNA building.

“Why would anybody in their right mind want to be sitting on that road inhaling fumes?” asked Rose Marie Costa, of River Road.

Lustberg, following up on questions raised at a prior hearing, said that a large London plane tree on Bodman Place, with much of its root system already compromised, could not be saved.

Instead, he said, “what we’re doing is coming back in with 34 street trees that will be properly planted.”

Stormwater, he said, will be collected in a yet-to-be designed detention basin beneath the building, with timed releases into the municipal storm system. Dog urine, he said, will run through an “engineered antimicrobial” filtration system and into either the storm system or the sanitary sewer system that carries waste from toilets, depending on which the borough building department requires.

The Saxum plan requires no variances. But attorney Ron Gasiorowski, representing the owner of the Colony House, sought to establish that the plan, by calling for two driveways in addition to his client’s sole driveway, exceeds the limit of two set by the redevelopment plan.

And the board does not have the authority under the law to grant any “waivers” sought by the developer, he contended.

Alexander Litwornia, a planner and traffic expert hired by the Colony House, also questioned the location of the plaza.

“I think that a park, with people sitting there and children sitting there, it would not behoove one to have it on the outside of a curve,” he said. “Putting it on Bodman would make a safer design.”

So far in the hearings, neighbors and others in the audience have had to hold their comments, limited instead to asking questions of each Saxum professional about their testimony.

Now that testimony is concluded, that will change at the next session, scheduled for October 7, when an up-or-down vote on the plan is possible.

“The next meeting is all about the public, folks, “said board chairman Dan Mancuso as the three-hour session ended.