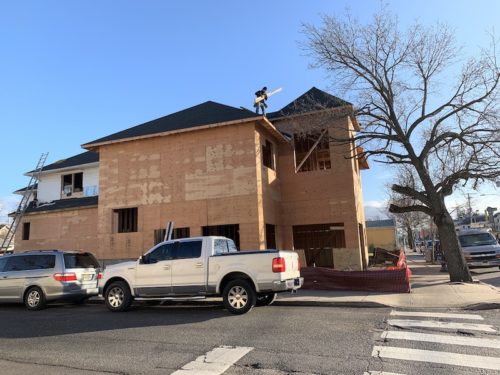 A long-vacant structure on Shrewsbury Avenue in Red Bank is getting a major addition.

What’s Going On Here? Read on for the answer… and some history. (Photo by Trish Russoniello. Click to enlarge.) Renderings of what’s to come, above, and the property as it appeared in November, 2018, early on in the rehab project, below. (Photos by John T. Ward. Click to enlarge) The  house at the southeast corner of East Leonard Street and Shrewsbury Avenue is being rebuilt with an addition in what was the front yard.

When completed, the new structure will feature 1,160 square feet of retail space on the first floor, a first-floor apartment and two on the second floor, according to plans approved by the zoning board in October, 2017.

The apartments would be about 1,400 square feet each, according to testimony.

The house had been vacant for at least five years when is was purchased for $261,000 in early 2017 by Aldi Tafani, of Colts Neck, according to property records.

Tafani did not reply to an email seeking an update on the estimated completion date and commercial tenants.

Parker Sr. was the son of a former slave who came to Red Bank in 1916, and maintained his practice there until his death in 1973, according to an obituary published by the Red Bank Register.

His son was born in the house in 1919, and lived there until his death in 2004, according to a tribute on the website of the nearby Parker Family Health Center, which is also named for the pair.