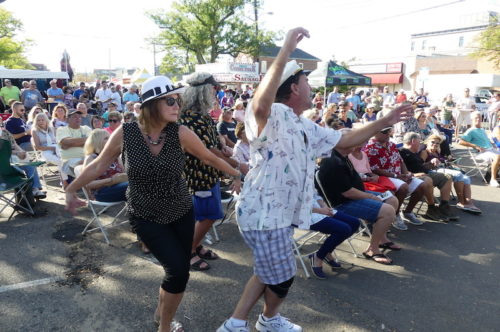 RiverCenter sponsors two festivals in the White Street parking lot each year, the next of which is scheduled for April 9. (Photo by John T. Ward. Click to enlarge)

As RiverCenter’s marketing and promotions manager for the past two years, the Rumson resident worked under Jim Scavone and served as the agency’s interim director after his departure in January.

In a press release  announcing the RiverCenter board’s appointment Thursday,  Chairman Stephen Catania, owner of the Cheese Cave on Monmouth Street, said Kirkpatrick “has a strong skill set reflective of her decades of marketing and public relations experience in the public and private sectors.”

Prior to joining RiverCenter in March, 2018, Kirkpatrick held posts in Monmouth County government, where she directed tourism interests and served as the media spokesperson.

She holds a master’s degree in Corporate and Public Communications from Monmouth University and a bachelor’s in Urban Affairs and Planning from Boston University, according to the announcement.

Answering to a board that represents some 400 downtown landlords, merchants and restaurateurs, RiverCenter’s executive director leads efforts to promote both business investment and tourism in the district.

The job calls for managing a budget $538,000, funded by a surtax on commercial properties in the district, which extends from Broad Street to Bridge Avenue, mostly north of Monmouth Street.

RiverCenter also organizes two of the town’s biggest annual events, which draw tens of thousands of visitors to the White Street parking lot: the International Beer, Wine & Food Festival, scheduled for April 9, and the Guinness Oyster Festival, slated for September 27.