RED BANK: HOSPITAL TO OWN GARAGE 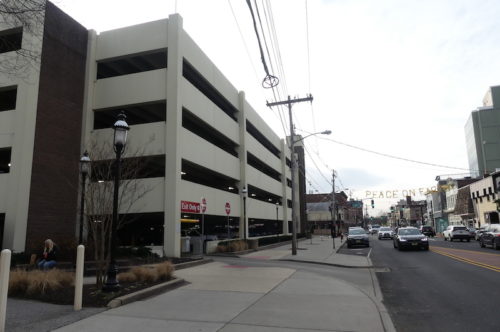 The garage, built in 1983, became the subject of a lease-purchase deal between the town and Riverview 17 years later. (Photo by John T. Ward. Click to enlarge)

It’s a mere formality, but Riverview Medical Center is slated to become the owner of Red Bank’s only publicly-owned parking garage Friday.

At its regular meeting Wednesday night, the borough council authorized officials to sign off on a property transfer worked out when the current council president was in middle school.

The deal adds to the nonprofit hospital’s growing portfolio of real estate. 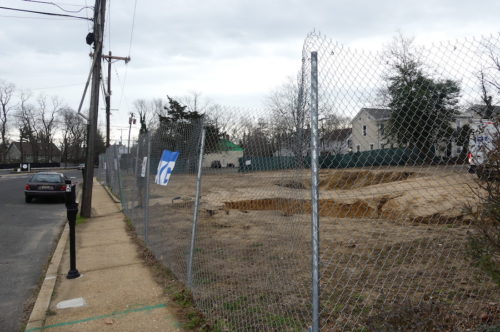 Riverview has a contract to buy property at the corner of East Front and Spring streets, where a developer won approval for a medical office building in 2019. (Photo by John T. Ward. Click to enlarge)

The five-story, 519-space garage, at East Front Street and Globe Court, was built in 1983 as a joint venture between the borough and hospital. Riverview, then undergoing explosive facility growth, was strapped for parking areas for employees and visitors, officials said at the time, according to reporting by the Red Bank Register.

At the expiration of a longterm lease in 2000, the two parties entered into a lease-purchase agreement, under which the hospital would pay the borough annual rent, starting at $210,000 and rising to $350,000 in each of the final seven years. The sum represented a 25-percent premium over the borough’s debt payments on the facility.

As part of the deal, 41 parking spaces on the ground level were reserved for borough use, but that requirement expired in 2002.

At the end of the lease, on January 31, 2021, the deal called for the borough to transfer title on the garage to the hospital for $1. That’s the paperwork authorized by the council Wednesday night, in a resolution that did not appear on the agenda.

Business Administrator Ziad Shehady said “last-minute changes between the two parties’ legal teams” prevented the document from being listed on the published agenda.

In response to questions from redbankgreen, Riverview interim chief executive Tim Hogan said in a prepared statement Wednesday that the garage “will continue to operate as it always has and there are no plans at this time to alter that.”

He did not, however, address questions about the hospital’s real estate buying spree of recent years, bolstering its holdings in the area north of Mechanic Street, between Globe Court and Spring Street.

Last month, over the objections of preservationists, the hospital tore down a 19th-century mansion at 95 East Front Street, which it acquired along with an office building in 2015.

As reported by redbankgreen, the hospital also has under contract vacant lots at the corner of East Front and Spring streets, where developer Geoff Pierini won planning board approval in 2019 for a 27,000-square-foot, three-story medical office building with underground parking serviced solely by a vehicle elevator.

Riverview has not indicated how it plans to use the properties.

Asked about the impact from the loss of income to the borough, Shehady told redbankgreen earlier this month that the administration has been “adjusting the municipal operating budget to be less dependent on the parking utility – an important lesson that was emphasized more so during the pandemic.”

As a government-owned property, the garage site hasn’t been on the tax rolls for 40 years. Riverview “will have an opportunity to apply for exempt status on this property,” Shehady said.

Under a separate agreement, the hospital allows downtown special improvement district manager Red Bank RiverCenter to sell permits for 40 parking spaces in the 80-space surface lot behind the garage to downtown merchants, according to agency executive director Laura Fitzpatrick.

None of the current council members was in office when the deal was struck, a point two of them made. “I think I was in middle school at the time,” said Council president Hazim Yassin, leading Wednesday’s meeting in the absence of Mayor Pasquale Menna.

Menna was a councilman at the time of garage deal.