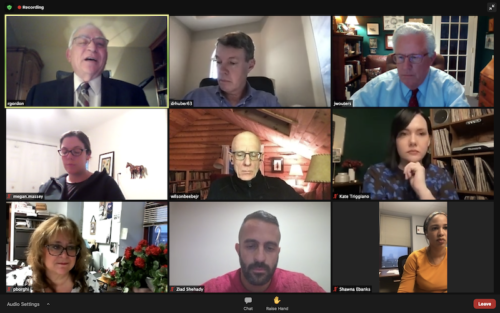 The agency, created in May, 2019, has several weighty tasks. One is to evaluate the conditions and potential costs of repairing or consolidating a roster of municipal properties.

Tuesday’s session, the first of 2021, had a light agenda of reorganization. David Huber was elected to his third term as chairman, though he said this would be his last, noting that he was on the Zoom call from Sarasota, Florida. Megan Massey was re-elected vice chairwoman.

But several residents sought to engage the agency on the fate of the Senior Center, which has been out of commission for nearly two years, since it was badly damaged by a leak of the fire suppression system.

Before they weighed in, though, Huber said he’d seen reporting on the center and asked, “does that impact on how we operate? Is there anything we ought to be doing differently knowing that’s kind of in the background?”

Business Administrator Ziad Shehady, who doubles as the agency’s executive director, said the agency is continuing on its track of completing feasibility studies of borough properties “and prospective properties,” as well as a financial analysis, with the aim of eventually making one or more recommendations to the council.

During the public comment session, Tiffaney Harris, a former Senior Center outreach worker, asked the agency if the Senior Center would be repaired.

“That’s not this agency’s decision to make,” Huber said. “We are heading down a path of gathering all the facts and making a recommendation,” he said.

Bank Street resident Brian Donohue urged the agency to add another factor to its analysis.

“One of the appeals of growing old in this town is having a Senior Center on the river,” instead of a cinderblock building in a nondescript location, he said, referring to the upper Navesink. “That location is such as unique and special spot. I just hope you’ll  keep that in mind.”

Shehady said he and agency consultant Ken DeRoberts had received appraisals of municipal properties commissioned last fall, and were reviewing them with its financial advisors in advance of preparing a report.

Mayor Pasquale Menna urged agency officials to have the report ready for the February meeting.

In response to questions by former Councilwoman Cindy Burnham, Shehady declined to identify the properties appraised.

“You can’t tell us if it’s the municipal hall, the Senior Center, the DPW?” Burnham asked.

“Ms. Burnham, was my response to your question unclear? I said no,” Shehady replied.

Councilwoman  Kathy Horgan, newly appointed to the agency, was absent because of a work commitment, Huber said.

The members also agreed to change the meeting time to 5 p.m., from 4:30. The agency meets on the fourth Tuesday of the month, except for November, when it will meet on the fifth Tuesday.