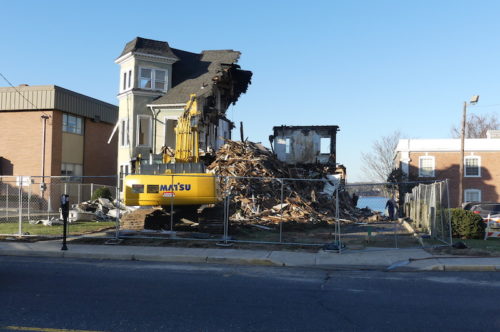 The planning board approved the demolition of 95 East Front Street in July, 2019. (Photo by John T. Ward. Click to enlarge.)

Meantime, the hospital is planning to gobble up more real estate, redbankgreen has learned: a vacant lot directly across East Front Street from the mansion. 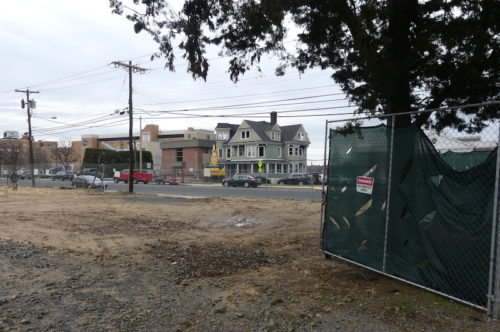 The fenced lot in the foreground, at the corner of Spring and East Front streets, is under contract for purchase by Hackensack Meridian. (Photo by John T. Ward. Click to enlarge.)

Over the course of the day, heavy equipment gouged into the three-story Victorian, located on a bluff overlooking the Navesink River.

In a statement issued by spokesman Tony Perry, Riverview said it had “received all the required and necessary approvals from the Borough of Red Bank to safely demolish the building” at 95 East Front Street.

According to research by former owner Grace Greenberg, the three-story structure may have been owned by descendants of James P. Allaire, founder of the Howell Works bog-iron forge in Wall Township — now preserved as Allaire Village.

The house was “one of the dwindling examples of grand, riverfront Victorians that make us ‘Historic Red Bank,’ regardless of who once owned it,” Michaela DiBernardo Ferrigine, chairwoman of the borough Historic Preservation Commission, said via email Monday. “The house was historic due to its singular architecture and that fact that it represented a period of time of industrial and economic success in this Borough.”

Hospital parent Hackensack Meridian Health bought the property, along with the red brick office building next door at 91 East Front Street, for $2.65 million in July, 2015. It has sat vacant ever since.

In February, 2019, the planning board approved a hospital request to raze the sprawling former mansion and apartment house. Ferrigine said last month that the commission had not been notified in advance of the hospital’s request.

At the HPC’s November meeting, member Kal Pipo tore into the planning board for allowing the the demolition to go ahead, and said Mayor Pasquale Menna had “sounded like he was the lawyer for” the hospital when the Ok was granted.

Also at that meeting, member Gary Saphire reported that he had met with hospital officials in the hopes of saving the structure, but they were “intransigent,” and insisted that it could not be adapted for a new use.

“While there are no immediate plans for development on this property, we look forward to working, as we always have, with the borough on the future usage of this site,” the hospital’s statement read.

At the same time, just across the street from the mansion, the hospital plans to buy three vacant lots at the corner of Spring Street.

There, developer Geoff Pierini won planning board approval in 2019 for a 27,000-square-foot, three-story medical office building with underground parking serviced solely by a vehicle elevator.

A contract between Pierini’s company and a hospital subsidiary, filed with the Monmouth County Clerk’s office in July, did not include the price, and no deed showing completion of the sale appears to have been filed.

It was unknown if Riverview would go ahead with Pierini’s plan or some variation on it. Hospital spokesman Perry said only that Riverview has “no immediate plans for those properties.”

Hackensack Meridian also owns the vacant former site of the Worden-Hoidal Funeral Home at 60 East Front Street, across the street from the hospital, which it acquired for $2.3 million in 2008. While the nonprofit pays no taxes on the hospital property, it paid $34,138 in property taxes on funeral home site over the last four quarters, borough records show.

The mansion site has generated $30,790 in taxes over the past year.