Filmmaker Kevin Smith  is in the process of relocating his store to 65 Broad Street, seen above in 2014. Below, illustrations filed with the HPC application. (Photo by John T. Ward. Click to enlarge.) 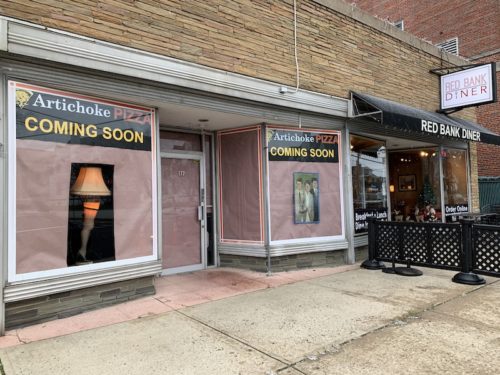 Among the applications on a jam-packed agenda:

• As previously reported,  Artichoke Basille’s Pizza, a New York City-based franchise, plans to open a company-run store in the middle portion of the three-storefront building, between the Red Bank Diner and Red Bank Cleaners.

The 40-seat restaurant needs approval for signage, which includes a blade sign in the shape of a pizza slice.

The papered-over windows at the address now display a stockinged-leg lamp and a portrait of brothers Jack, Teddy and Bobby Kennedy. The latter is apparently an Artichoke Basile’s tradition. According to a 2016 report by Bushwick Daily, the image is a copy of an original painting done by the great-grandfather of pizzeria co-owner Francis Garcia, and it’s displayed at every Artichoke Basille’s location.

• As reported in November, Secret Stash, the comic books and collectibles store owned by filmmaker Kevin Smith, is in the process of  relocating from its longtime home at 33 Broad to 65 Broad, a long-vacant single-story building on the southeast corner of Wallace Street.

The new place needs sign and awning approvals. The building is owned by B  & M Realty Management of New York City.

• Before it gets to any of the above, the commission is expected to continue discussion about a proposed residential gate on River Road, and also has applications for signage on two office buildings owned by Downtown Investors.

Here’s the full agenda. The meeting is scheduled to begin at 7 p.m., and will be conducted via Zoom. Access and participation information can be found here.