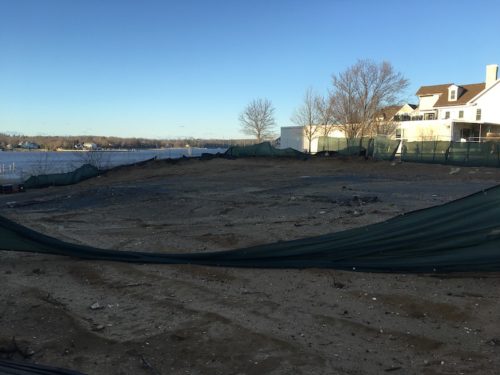 The empty lot, located next door to the public library, slopes down to the Navesink River. (Photo by John T. Ward. Click to enlarge.)

Months after long-vacant buildings next door to the Red Bank Public Library were demolished, not much progress appears to have occurred on a development plan for the site.

What’s Going On Here? Read on for the latest. 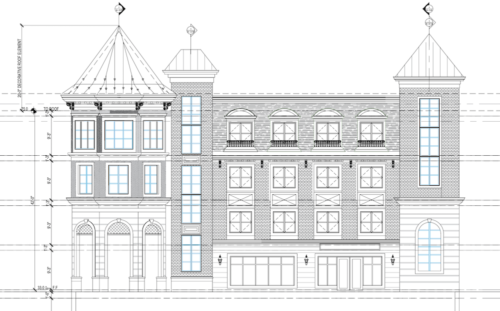 The new plan for a proposed four-story building at Maple Avenue and West Front Street retains an octagonal turret on one corner. (Rendering by Michael James Monroe Architect. Click to enlarge.)

Developer Mark Forman obtained planning board authorization in July, 2018 for a four-story building with eight luxury apartments on the site, at the northeast corner of West Front Street and Maple Avenue.

Forman later sold the site and approvals for $1.8 million to an entity called 96-98 West Front Street LLC, with Samuel Shamaev of Middletown as a principal. After a pandemic interruption, the buyer completed demolition of the two long-vacant buildings on the property in October, and construction fencing has surrounded the property since.

Now, Shamaev has filed revised plans for the site, while retaining Forman’s name for the project: Rivermark.

He wants to build 10 apartments, with 600 square feet of commercial space, in a building similar in style to Forman’s. Both were designed by Red Bank-based architect Michael James Monroe and feature a prominent corner turret.

Eight units would have balconies overlooking the Navesink River. The plan also depicts a rooftop “pool/spa,” 600-square-foot gym and greenery on the roof.

The plan includes 28 parking spaces, with 16 on a single level beneath the building. Only 24 are required by ordinance, according to a filing by the applicant’s contract engineer, James Kennedy.

The application needs variances for density – 16.39 units per acre, where 16 per acre are allowed – and floor-area ratio.

The date of a zoning board hearing for the request was not immediately available, and Shamaev did not respond to a request for information.

Meantime, the borough has completed negotiations with Shamaev over an easement that was a condition of Forman’s approval. The easement would add to others along a stretch of riverfront properties reaching from Maple Cove to Marine Park for possible creation of a long-contemplated Riverwalk boardwalk.