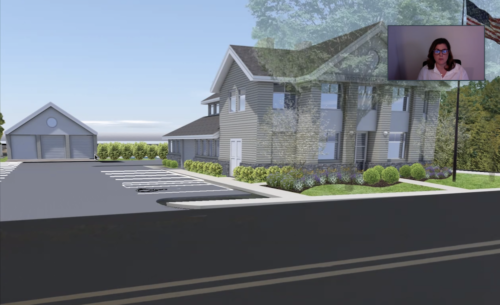 Architect Margaret DeSantis describing the design of the proposed new police station, at right, and storage facility at left. (Concept by the Goldstein Partnership. Click to enlarge.)

Fair Haven moved to the fine-tuning stage on two major redevelopment projects Monday night, offering residents yet another chance to influence the looks of a new police station and a new public works yard.

Both, located in residential areas, continued to draw praise for fitting in. 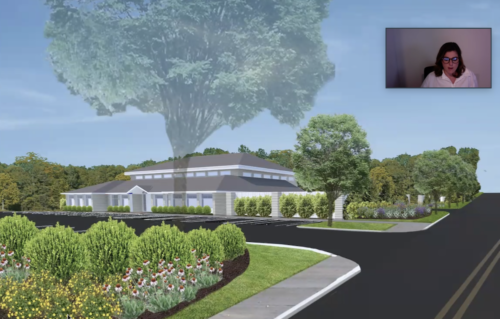 A view of the proposed DPW facility from Third and Allen streets shows the complex surrounded by landscaping. Below, a recent view of the police station. (Concept by the Goldstein Partnership, photo by John T. Ward. Click to enlarge.)

During the council’s semimonthly meeting, conducted via Zoom, architect Eli Goldstein and a colleague, Margaret DeSantis, described the latest iterations of their plans for:

•  a police station on the site of the existing one, on Fisk Street

• and a wholly remade public works, recycling and engineering complex on Third Street between Allen Street and Maple Avenue.

Emphasis was given in the designs to the fact that both are smack in the middle of residential neighborhoods, DeSantis said.

She noted efforts to make the garage portion of the DPW structure, where 50-foot deep bays would be used to maintain heavy equipment, blend in.

Clerestory windows beneath the eaves would provide natural light into the garage, she noted.

The two projects would employ similar siding, windows and pilasters, said Goldstein “to give both buildings a similar, residential scale.

“Anyone in that neighborhood will understand that these are part of a family of public buildings that are sized appropriately to be in a residential neighborhood,” he said.

Both plans have been shaped by public input over many months, including detailed reviews by the planning board, said Councilman Chris Rodriguez, who chairs the facilities committee. As council president, he led the council session in the absence of Mayor Ben Lucarelli.

“I want to say many, if not all” ideas submitted by residents “have been folded into these designs and site plan,” said Rodriguez.

Residents praised the incorporation of restrooms into the back side of a planned police garage, facing ballfields. Others had suggestions about parking lot traffic flows, screening gates and more.

Ruth Blaser of River Road pressed officials to allow seniors and the local garden club to use a meeting room on the second floor of the police station as meeting space.

Grange Avenue resident Tracy Cole questioned the cladding on the four pilasters on the facade of the police station.

“Where I got a little lost is on the use of the siding on the vertical elements,” she said.

“We certainly can look at other materials,” said Goldstein. “But I think we didn’t want the building to look too self-important.

“We wanted to make it look a little more formal than a house,” he continued, “but not so formal that it emphasizes the fact that it’s a public building in a residential neighborhood.”

Each existing facility would continue to operate while its replacement is constructed, officials have said. In the case of the police station, that means a new structure would rise just feet from the current one, a onetime Blacks-only segregated schoolhouse repurposed for use as the police station in 1983.

Costs of the two plans went unmentioned, as they did during the planning board capital reviews of each in recent weeks. Last October, Lucarelli estimated they would cost a combined $11 million.