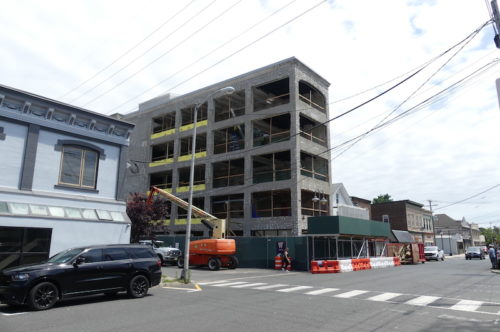 Part of a recent building boom, 170 Monmouth Street is being converted from offices to residences, as seen in June. (Photo by John T. Ward. Click to enlarge.)

But only if it doesn’t get thrown out by a judge, says Mayor Pasquale Menna. The ordinance, spearheaded by Ballard and adopted by the council last week, calls for specified fees, ranging from $3 to $4.25 per thousand feet of lot coverage, to help offset the costs of new roads, sewers and other municipal infrastructure, Ballard said in a statement emailed to redbankgreen Wednesday.

The new fees do not apply to additions to existing owner-occupied residential dwellings “unless said addition increases the total square footage of lot coverage by the dwelling by more than 50%,” the ordinance reads.

But at the council’s August 18 session, Menna questioned the footing of the ordinance. While development impact fees “are certainly legal,” he said, the new law should be supported by either a study or an ordinance that specifies the radius of area to a development in which the fees will be applied.

As an example of a “triggering event,” Menna said a specified contribution to recreation could be tied to a threshold number of new residential units.

Citing his 40 years experience as an attorney dealing with land use law, Menna said that in the absence of either, “I will guarantee you that some smart lawyer, after they get the approvals for development, will sue us in Superior Court,” claiming they agreed to the fees only because the borough “put a gun to” their heads.

Ballard countered that the ordinance had been drawn up by borough construction official Tony Neibert, based on one in use in Carteret, where he previously worked, and that Middlesex County town had not been sued.

The law had also gone through committee review and council workshops, he said.

“I think it’s good, I think developers should contribute fairly to our infrastructure,” Ballard said. “If developer are going to fight us tooth and nail on everything in this borough, then we need to rethink who we’re doing business with in Red Bank.”

Borough Attorney Greg Cannon said that while he could not guarantee the law wouldn’t face a lawsuit, “the enforceability of the ordinance is really based on the justification of the fees therein,” he said. “I’m not sure there’s a right or wrong way to do it. It’s a matter of risk tolerance.”

The law also allows developers to “voluntarily” agree to pay, and the borough to accept, money or in-kind contributions that reflect “the proportionate share of the cost of providing reasonable and necessary off-tract improvements,” it reads.

The council can also “waive the requirements of this article for any duly authorized redevelopment project,” it says.

All six council members, all Democrats, voted in favor of the ordinance; as mayor, Menna has no vote except as a tiebreaker. Ballard thanked the council “for looking forward and bringing in potentially more revenue to run our municipality.

“We’ve had a skewing of the support from tax base” favoring developers over residents, he said “and this is a form of revenue that we can use to hopefully lower the tax rate and the taxes we ascribe to our residents.”

The borough already has on the books, section 490-71 of the planning and development ordinance, a requirement that developers contribute to off-tract improvements, and sets standards by which the costs would be allocated, but not specific fees. Ballard did not immediately address questions sent to him by redbankgreen about other differences in the two laws.