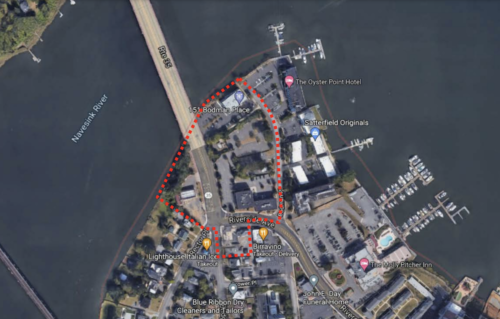 Outline indicates the properties under consideration for “area in need of redevelopment” designation. (Click to enlarge)

A possible zoning reclassification for the site of an approved 210-unit apartment project is scheduled go to the Red Bank planning board Monday night.

The review will offer the first public airing of a request by would-be developer Saxum Real Estate for tax breaks in order to proceed with the project. Borough Redevelopment Agency consultant Ken DeRoberts said last month that Parsippanny-based Saxum claims to need tax relief in the form of a payment in lieu of taxes, or PILOT agreement, in order to build the project.

DeRoberts said Saxum is not seeking an increase in the number of approved units, nor to reduce the number of affordable units – 32 – required under the planning board’s existing approval, granted in December, 2019. But the increased cost of building materials since then changed the economics of the project, he said.

“This is primarily a financially driven plan,” DeRoberts told the agency. Saxum’s request “is based on the fact that they need a PILOT from the municipality in order to make the project economically viable.”

In June, the borough council, which will decide both the zoning and taxation questions, directed engineering consultant CME Associates to review the 3.2-acre site Saxum property, along with others in the area, for possible redesignation under New Jersey law to an “area in need of redevelopment,” from the present “area in need of rehabilitation.”

Also in the review were two abandoned gas station sites at Riverview Avenue and Route 35, as well as properties on the west side of Bodman Place. CME found all, except the Coastal Building office structure, met one or more criteria for a redesignation under state law.

Here’s the CME report., whose cost was to be borne by Saxum.

The report makes no mention of the PILOT benefit. PILOTs generally call for tax exemptions for a specified period, up to 30 years, on site improvements. Instead, beneficiaries of the exemptions make specified “in lieu” of tax payments that, unlike standard levies, the town would not have to share with school districts.

The meeting is scheduled for 7 p.m., in-person only, at borough hall, 90 Monmouth Street. Here’s the agenda, which also includes a hearing on a plan for 10 new apartments at the corner of Riverside Avenue and Allen Place.