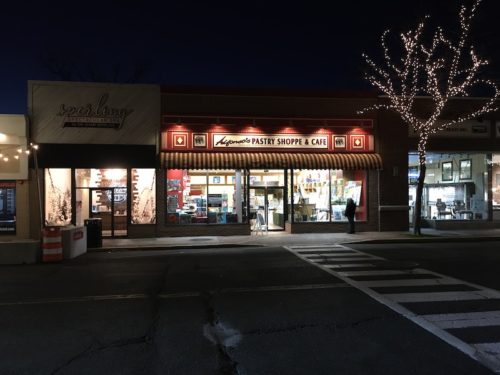 The aroma of baked sweets may again waft in the area of Broad Street and Linden Place in downtown Red Bank.

Once Bitten Donuts, which describes itself as a “bakehouse, creamery and café,” announced plans to open at 86 Broad Street on Instagram Monday.

Among the offerings: donuts with names like “Give me some of that cinnabun” and “Let’s give ’em pumpkin to talk about.”

Jim Hurta, a partner in the business, which also has a store in Massapequa Park, New York, told redbankgreen a March, 2022, opening is planned.

The large retail space at 86 Broad Street was previously home to Carlo’s Bake Shop, owned by television’s ‘Cake Boss’ Buddy Valastro, which closed in August, 2018 after a five-year run. It was followed by Alfonso’s Pastry Shoppe, which closed in June, 2020 as a result of the COVID-19 pandemic.

For most of the past year, it was occupied on a pop-up basis by purveyors of arts and crafts. The last remaining of them, artist Mike Quon, relocated earlier this month to 93 Broad, directly across the street, where his Quon Art Gallery 93 replaced Midtown Authentic.

Both buildings are owned by Ten Company.