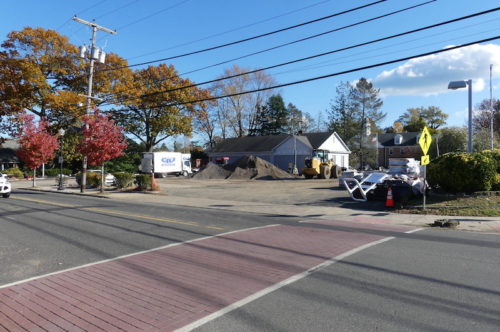 The project would be built on the former Sunoco site at River Road and Cedar Street. (Photo by John T. Ward. Click to enlarge.)

A proposal for Fair Haven’s first multifamily development in modern times, if not borough history, is scheduled to go before the planning board Tuesday.

A rendering of the proposed development as viewed from River Road. (M&M Realty Partners. Click to enlarge.)

M&M Realty Partners has applied to build 14 apartments above commercial space on the site of a former Sunoco station at at 626 River Road.

The proposed three-story building would include 4,250 square feet of ground-floor commercial usage, with residential units on the second and third floors.

Both borough Administrator Theresa Casagrande and planning board Chairman Todd Lehder told redbankgreen they were unaware of any residential structures in town with more than two dwelling units.

The site, which has been vacant for 10 years, was considered as a location for a bank, an idea that M&M withdrew in the face of opposition in 2016.

In October, 2018, the borough announced plans for a building a new town hall and police station on the property. But M&M exercised an option to buy the site, derailing the borough plan.

In early 2020, the town finalized a settlement with the Fair Share Housing Center over the town’s affordable housing obligations. That pact called for M&M to be permitted to build up to 14 apartments on the site, with two set aside for low- and moderate-income tenants.

M&M’s application is for site plan review, and does not include requests for any variances, according to a filing with the board.

The board is scheduled to meet in person at borough hall at 7:30 p.m. Application documents can be found here.