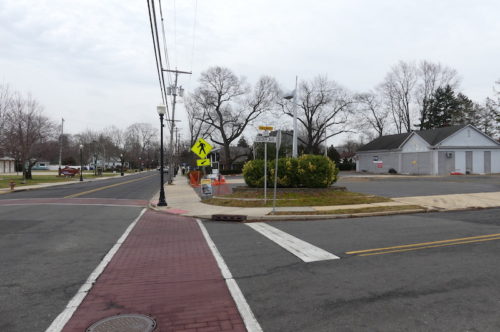 The former Sunoco property on River Road could get 14 apartments under the plan. (Photo by John T. Ward. Click to enlarge.)

A vacant gas station envisioned as the site of a new Fair Haven borough hall just a year ago would instead get 14 apartments under an affordable housing settlement detailed by officials Monday night.

At a special council session held at Viola Sickles School to address the town’s legal obligation to accommodate low-and moderate-income earners, residents also heard about a plan for a two-family home to be built by Habitat for Humanity in a residential neighborhood. 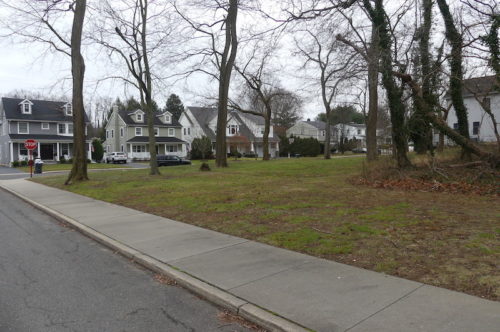 A portion of the vacant lot at Hendrickson Place and Allen Street, above, would be developed by Habitat for Humanity as a two-family home. Below, attorney Mike Edwards speaking at Sickles School Monday night. (Photos by John T. Ward. Click to enlarge.)

Those two projects, as well as a new “overlay” zones that could add dwelling units above stores in the business district and at the site of a church, play key roles in a proposed settlement with the Fair Share Housing Center, said Mike Edwards, an attorney hired by borough to handle housing issues.

Though the borough’s legal obligation following a long series of court rulings is 371 homes affordable, a shortage of developable land reduces the realistic potential for new housing to four units, officials said.

The remaining 367 units are classified as “unmet need” that “can’t realistically be provided” in the next five years, said Susan Gruel, of the Heyer & Gruel, the town’s contract planner.

The overlay zone retains the existing zone’s characteristics while giving commercial property owners the right to add residences above stores and offices, within restrictions.

Involved in the settlement negotiated over the past nine months is M&M Realty Partners of Piscataway, which acquired the former Sunoco station at River Road and Cedar Avenue in late 2018 for $1.3 million, according to Monmouth County records.

M&M would be permitted to build up to 14 apartments, two of them set aside for low- and moderate-income tenants, atop ground-floor commercial uses in a building up to 38 feet tall.

Two more affordable units would be built by Habitat for Humanity on a half-acre vacant site owned by the borough on the northwest corner of Allen Street and Hendrickson Place. M&M would kick in $175,000 for that project.

A second overlay zone would apply to the five-acre property owned by the Methodist Church tucked in between the Fair Haven Fields Natural Area and borough playing fields. Town officials said they know of no plans by the church to sell or develop the site.

Heres an overview of the proposed settlement.

Terms of the deal were worked out in confidential negotiations by borough officials and professionals over the past nine months, said Casagrande.

After an adoption vote by the council expected later this month or next month, the matter would move to Superior Court for possible approval, which would “insulate” the borough against so-called “builder’s remedy” lawsuits through 2025, said Edwards.

At Monday’s presentation, about a dozen residents had questions about the proposal, while none voiced strong opposition.

Jillian Hoagland of Hendrickson Place asked how the provision calling for the town to donate the land at Hendrickson and Allen came to replace an earlier proposal: using excess land at the borough public works site to create affordable housing.

The smaller lot land is “readily available,” Mayor Ben Lucarelli said in response. While a portion of the DPW lot is about to be developed as a new facility for that department, the future of the property abutting the site “is not even being considered right now,” he said.

Jennifer Spitz of William Street asked if the settlement wouldn’t place “an unfair burden” on the eventual buyer of the two-family at Allen and Hendrickson, requiring the owner to become a landlord as well.

“Have you thought about another solution that doesn’t make somebody a homeowner and a landlord who may not want to, or may not be in a position to?” she asked.

Edwards said the owner would have the assistance of an outside agency in locating and credit-screening potential tenants. He said the arrangement “isn’t set in stone, but the current theory is that the homeowner would be the landlord as well.”

The proposal for the Sunoco site would appear to be a blow to an ambitious plan touted by Lucarelli to consolidate borough facilities. His proposal, unveiled in detail just a year ago, envisioned the creation of a new borough hall and police station on the site, which has been unused since late 2011.

Following the meeting, Lucarelli told redbankgreen that the facilities consolidation plan is not dead, and that a committee is still working behind closed doors on it because it involves potential property transactions.

Meantime, the council is moving toward solicitation of bids to build the new DPW operation on Third Street, which would leave the borough with a swath of adjoining, developable property. No decisions have been made about what to do with the land, he said.

When the new DPW plant is completed, “that land will be there, and we’ll consider it then,” Lucarelli said.