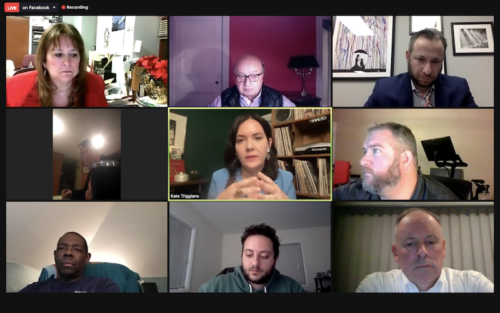 The council meeting was the final one scheduled for 2021. (Screenshot from Zoom. Click to enlarge.)

The Red Bank council’s final regular meeting of 2021 included a new police contract, a plan to recombine workshop and regular sessions, a new used Tesla, and praise for a departing colleague.

• Approved a new collective bargaining agreement with the Policemen’s Benevolent Association Local 39. No details have yet been disclosed.

• Set a meeting schedule for 2022 that recombines the monthly workshop session with the first of two regular sessions per month.

The year begins with the annual municipal government reorganization on January 1 at 3 p.m. The event will include swearing-in ceremonies for Councilwoman Kate Triggiano, as she begins a second three-year term, and newcomer Jacqueline Sturdivant, filling a seat being vacated by Hazim Yassin after one term.

Councilman Michael Ballard questioned the logic of setting the schedule without input from Sturdivant, but did not oppose adoption.

• Accepted the retirements of two public utilities department employees: Ray Livingston, who worked for the borough for 32 years, and Dewitt Bacon, 25 years.

• Accepted the donation of a used Tesla Model S.

• Triggiano and Mayor Pasquale Menna praised Yassin for his service. Triggiano was Yassin’s running mate when they were elected in 2018, and they shared a ticket leading to the Democratic primary in June, in which Sturdivant topped Yassin.

• The council went into a closed-door executive session to discuss the PBA agreement; the question of who should pay to replace leaking water supply lines on Broad Street; and an unspecified a potential matter of litigation related to land use, said Attorney Greg Cannon.

On returning to the public session after about 100 minutes, the council approved the PBA contract, without comment, and did not address any other matters before adjourning.