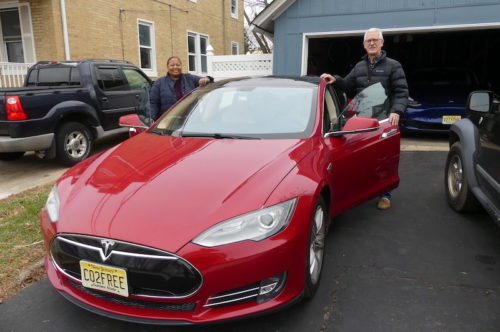 Nancy and Phil Blackwood with the car they’ve offered to the town. (Photo by John T. Ward. Click to enlarge.)

A fire-engine red Tesla sedan may become part of the Red Bank municipal fleet this week, pending the acceptance of a proposed donation by a borough couple.

Phil and Nancy Facey Blackwood of Chestnut Street have offered to give the town a 2013 Model S with an estimated value of $15,000. The donation is on the council agenda for its meeting Wednesday evening.

Phil Blackwood called it a “no-strings-attached offer for the purpose of helping Red Bank evaluate the feasibility of adopting electric vehicles in the future.”

His “underlying motivation,” he said, is to “help create momentum toward climate action.”

The model was selected as “Ultimate Car of the Year” out of 70 annual best-ofs by Motor Trend magazine. The Blackwoods have driven theirs 145,000 miles, and kept it current with system updates, including the installation of a new battery pack at 100,000 miles.

With an 85-kilowatt/hour battery pack, the car has an estimated range of 240 miles per charge. It also features a regenerative braking system that uses the vehicle’s momentum to add power to the battery when stopping.

Acting Business Administrator and police Chief Darren McConnell told the council at its December 1 workshop session that he had verified that the vehicle was “up to date and in very good condition.”

His intention, he said, “would be to circulate it through a couple of departments, including police and code enforcement.” He has worked out a schedule with the parking authority for re-juicing it at the public charging station on Monmouth Street outside borough hall, he said.

No council members commented on the offer at the session.

Teslas and other EVs are hardly a rarity these days, of course, and municipalities have begun incorporating them into their fleets, including for police use. Ford announced in September that it is “exploring all-electric, purpose-built law enforcement vehicles” as part of its overall $30 billion investment in electrification through 2025, according to Green Car Reports.

According a report out of England, the auxiliary systems installed on Teslas used for police work have had minimal impact on battery range.

“This is a way for the borough to get some real-life experience” owning an EV, Blackwood said, and the benefits, he said, are more than environmental.

“Electric vehicles tend to last a long time,” he said, and typically cost $2,000 per year less than a gasoline-powered car over the life of the vehicle, not counting subsidies and discounts.

The savings, he said in a recent letter to the mayor and council, could be “plowed back into paying the higher initial cost of heat pump systems” at borough facilities.

Blackwood recently advocated, unsuccessfully, that an electric heat-pump system be installed to replace the gas-fueled heating system at the Senior Center on Shrewsbury Avenue.

Nancy Facey Blackwood serves as chairperson for both the Environmental Commission and the newly empaneled Charter Study Commission, which will review the borough’s form of government. The couple’s home is outfitted with solar panels and a heat pump system for heating and cooling.

Here’s the resolution accepting the donation, and here’s the full agenda for the meeting, which is scheduled to be conducted via Zoom beginning at 6:30 p.m. Access and participation details can be found here.

Posted on December 14, 2021 at 7:50 am, filed under Auto, Cars, Energy, Environment, Featured, Government, RED BANK, Transportation and tagged agenda, council, darren mcconnell, electric vehicle, ev, nancy facey-blackwood, nj, phil blackwood, red bank, redevelopment, senior center, tesla. Bookmark the permalink. Follow any comments here with the RSS feed for this post. Trackbacks are closed, but you can post a comment. Email this story.
PREVIOUS: RED BANK: VNA TO OFFER VAX AND BOOSTER NEXT: RED BANK: “YOU BROKE IT, YOU FIX IT”