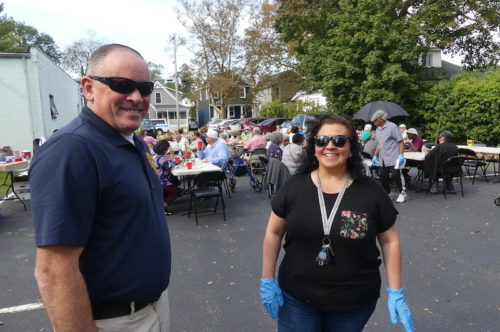 Red Bank’s council will try again to find a full-time borough administrator, following an abandoned effort of year ago.

The search will be revived even as the governing body, sharply divided on numerous other issues, appears to agree that police Chief Darren McConnell is doing a faultless job in double duty as interim administrator.

McConnell has been serving in the top borough hall job for a year, since Ziad Shehady resigned, while continuing to run the 39-member police force.

A $15,000 executive search for a permanent successor to Shehady failed to turn up suitable candidates, and was halted last summer, much to the consternation of Councilman Michael Ballard, who was then on the minority side of a bitter split in the all-Democratic council.

The search was dropped without the minority bloc being informed, even though four potential candidates had been identified, Ballard said at the time.

Mayor Pasquale Menna and two majority faction members said at the time that none of the candidates interviewed were “the right fit” for the job.

Now, Ballard is in the majority and running to succeed Menna as mayor, who was denied the nomination by the local Democratic organization headed by Councilman Ed Zipprich.

Last month, Ballard called for a “restart” of the search, saying “I just think it’s too much in our town” for one person to hold both jobs. He reiterated the concern at Wednesday night’s monthly council workshop session.

“Despite the job that Darren is doing, I think the police chief and the business administrator in Red Bank are two, hands-on, full-time jobs that deserve full-time attention,” Ballard said. “I think it’s unfair for him to do the work of two full-time positions, the top positions in the borough.”

Though McConnell “is doing an extraordinary job” and “has not missed a beat” in either of his roles, Menna said the majority’s request was a “legitimate public policy discussion.”

Ballard had the backing of Zipprich and Councilwoman Angela Mirandi. Councilwoman Jacqueline Sturdivant, who also frequently sides with the majority, was absent due to illness.

Without mentioning him by name, Zipprich alluded to the long tenure of former administrator Stanley Sickels, who retired in 2017 after a 38-year career in borough government, the last 21 as administrator. Sickels also served as construction official, fire marshal and purchasing agent.

“We’ve been down this road before,” Zipprich said. “The public was very vocal about the former borough administrator, who occupied a number of positions… I think it’s important that we have a dedicated administrator.”

Zipprich said McConnell “has done a really, really good job at balancing both the police department and the borough, but I know it’s taxing on him.”

In the minority were council members Kate Triggiano and Kathy Horgan. Triggiano noted the ongoing work of the Charter Study Commission authorized by voters in November to review and possibly recommend a form of government other than the borough form. McConnell, she said, had maintained “stability” at borough hall.

Triggiano said she agreed “the town needs a full-time BA, I’m just not sure about the timing.”

Like Triggiano, Horgan, expressed concern that the majority earlier this year endorsed a residency requirement, allowing the council to fire an administrator who does not become a borough resident within six months of hiring.

“We are narrowing the pool of candidates if we do that,” Horgan said.

Apparently alluding to the political turmoil in town, Horgan said,  “I’m wondering: how many people want to apply for jobs in this town?” she said. “Because we’ve lost so many people. People apply for jobs and then they disappear. They don’t want to be interviewed.”

Triggiano drew fire when she said that others on the council had suggested that McConnell was “not qualified or does not know this town. The man knows the town like the back of his hand.”

Ballard said McConnnell was welcome to apply for the job, “and he may be the best candidate.”

And no one had slighted McConnell’s performance, Zipprich said. “Nobody disparaged Darren’s ability to manage the borough police force, and nobody – I did not hear one member of this council –  say anything to the detriment of Darren’s ability to have stepped into this role and taken it to where it is today. I think he’s done the yeoman’s work.”

During his report to the council in the workshop session, Fire Marshal and Code Enforcement Supervisor Tommy Welsh pressed the council to conduct the search “diligently” to avoid replication a situation of four years ago, resulting in reduced morale among borough employees.

“We danced this dance before,” he said. “I implore you to talk to the people and get what’s going on… There’s a lot of good workers – they’re not mediocre, they’re good. And when you start losing that, you lose the memory, you start losing ‘what’s here, what’s there, what we need to do next.’ And I think it’s important that you guys think about that.”

McConnell’s contract as chief runs through 2023. He’s paid $187,000 a year as chief, and an additional $6,500 per month for his work as administrator. [Correction: The stipend was increased to $7,500 under a contract amendment unanimously approved by the council last November 23.]

Mirandi suggested, and the council informally agreed, to also restart a search for a full-time chief financial officer. Private sector Bob Swisher has been filling the role on a contract basis since the resignation last year of Peter O’Reilly.