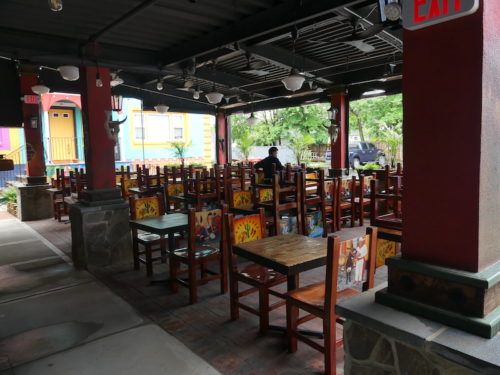 Juanito’s Charcoal Grill features outdoor seating with colorful murals on either side. (Photo by John T. Ward. Click to enlarge)

It was going to be a laundromat. Think: droning appliances, fluorescent lighting and the cloying scent of fabric softener perfuming  a stretch of Shrewsbury Avenue in Red Bank.

Luckily for Red Bank-area lovers of food and immersive atmosphere, Juan Torres changed his plans. And on Saturday, the serial entrepreneur will debut his newest creation: Juanito’s Charcoal Grill, a restaurant that’s a volcanic eruption of colors, aromas and flavors, inside and out. 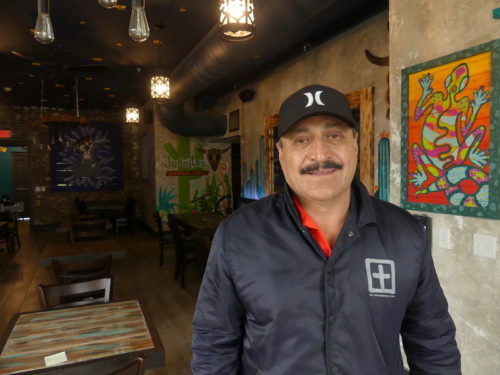 Juan Torres in the art-filled new restaurant in the apartment building he constructed at 191-193 Shrewsbury Avenue. (Photo by John T. Ward. Click to enlarge) 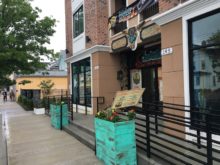 Locals may know Torres, 60, by his food-based shops, if not by face. Since the late 1980s, the Mexican immigrant has been building a mini-empire, starting with a small grocery store on Bridge Avenue.

A few years later, he opened Juanito’s Restaurant on Monmouth Street, in a small space across the street from its current location. But he hung onto his job as a sous chef at the Navesink Country Club in Middletown in case things didn’t work out.

Things worked out. He quit the job a month later.

He owns bakery and beverage shop on Monmouth Street, and a bakery on Shrewsbury that’s run by nephews.

In addition to the Tinton Falls home he built for himself, his third wife and three of his four children, Torres also owns five rental properties in Red Bank.

In 2017, he won approval to build a three-story structure in a vacant lot between Juanito’s Market and a strip of apartments he also owns. On the ground floor was to be a laundromat.

But the approval came with hefty up-front cost: an estimated $562,000 for water and sewer hookup fees and a Treatment Works Approval permit from the New Jersey Department of Environmental Protection required of large-scale water users. The machines would cost another half-million.

“I said, it’s not worth it” Torres recalled.

He went back to the zoning board in 2020 and obtained approval for the restaurant. That business was “cheaper, and better for Red Bank,” Torres told redbankgreen on a tour this week.

The restaurant features 55 hand-painted seats in a rapturously decorated dining room, and 55 more on a back patio framed by two-story murals on adjoining buildings Torres owns. He’s hoping to get permission from the owners of a garage to do one more on their building to complete the phantasmagorical enclosure.

“It used to be ugly,” Torres said of the apartments, located just steps from the patio. “At nighttime, people used to be scared to be out here. Now, people are happy. Kids can come here to play,” he says of the front yard.

Though it was Torres’ idea, and the menu was his, Juanito’s Charcoal Grill will be managed by Ismail Ortega, the chef at Juanito’s who came up as Torres did, starting out as a dishwasher.

The menu is “different from Juanito’s,” including ribeye and New York strip steaks, lamb chops, Portuguese dishes, paellas, pasta “and some Mexican food, too,” Torres said. “We mix it up a little bit.”

Juanito’s Charcoal Grill also features a take-out area to the right of the main entrance on Shrewsbury Avenue. The restaurant will be open seven days a week, serving lunch from 11:30 a.m. to 3 p.m. and dinner from 5 p.m. to 9 p.m., closing at 10 p.m. Saturdays and Sundays.