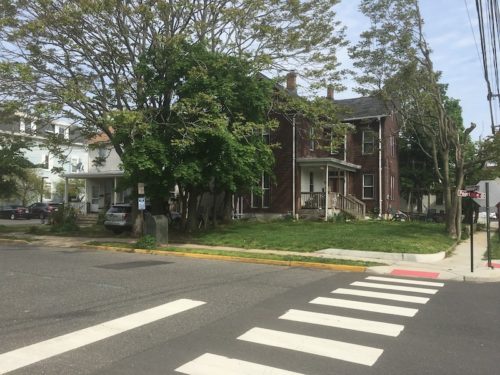 The house at the northwest corner of Oakland and Pearl Streets would be refurbished for rental as an affordable unit, if approved. (Photo by John T. Ward. Click to enlarge.)

The developer of a proposed 45-apartment project in Red Bank would satisfy part of his affordable housing obligation by restoring a house previously targeted for demolition, representatives told the zoning board Thursday night.

It’s the latest change to a plan that’s been inching its way through the review process for nearly three years. 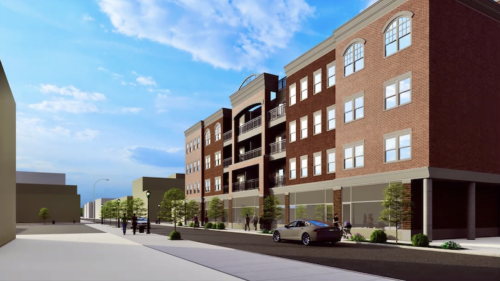 Rendering shows the Monmouth Street side of the proposed project looking eastward. Below, architect Mike Simpson addressing the board. (Rendering by SOME Architects. Photo by John T. Ward. Click to enlarge.) 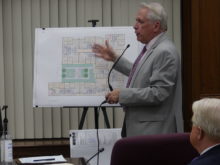 Developer Michael Salerno’s mixed-use plan calls for 45 apartments on three floors above self-contained parking at 121 Monmouth Street, on an irregularly shaped parcel that extends to Pearl and Oakland streets.

The site abuts properties owned by the Red Bank Charter School on both Monmouth and Oakland. The plan calls for the demolition of the onetime Big Man’s West, a nightclub owned by the late rock saxophonist Clarence Clemons, as well as a one-story building that houses his business.

The original plan, submitted in September, 2019, called for  five stories and 59 dwelling units. The board’s review began in February, 2020, a month before the onset of the COVID-19 pandemic put hearings on hold for months, and was later trimmed in size.

Now, Salerno attorney and former mayor Ed McKenna told the board that in response to its concerns, the house at 36 Oakland Street, slated for demolition and conversion to a parking lot, will instead be refurbished into a three-bedroom, off-site affordable unit.

Six more apartments within the new construction would also be set aside for renters who qualify as low- and moderate-income earners, he said.

The change solves “significant planning difficulties” that arose when trying to work the three-bedroom unit into the new building, McKenna said. Under borough ordinance, Salerno is permitted to have two units offsite, and had previously proposed providing them in properties he owns on the town’s East Side.

Architect Mike Simpson, of SOME Architects, also based on Monmouth Street, assured the board the house, at the corner of Pearl Street, would be of a quality equal to the others, as required by law.

A second house on the assembled lots, at 62 Pearl Street, would be demolished. The lot would be used to provided gate-controlled access to the project’s parking lot, which will not be visible from the street, Simpson said.

Thursday’s hearing still had not reached the point of public comments, with further testimony by the developer’s planning and traffic experts expected when it resumes June 2.