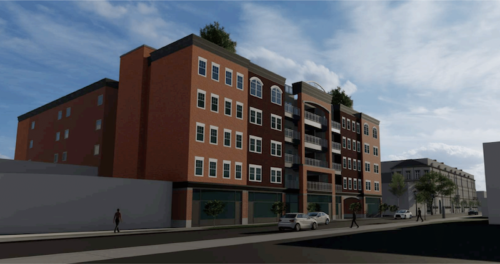 An elevation showing the Monmouth Street side of the proposed Salerno project. (Rendering by SOME Architects. Photo by John T. Ward. Click to enlarge.)

[UPDATE: The February 20 hearing for this project has been rescheduled at applicant’s request. No new date yet.]

A proposed 59-unit apartment project should be allowed to exceed Red Bank’s height and density limits based on the objectives of the borough’s master plan, its architect testified Thursday night.

A two-story building with seven units would replace an existing house at Oakland and Pearl streets. Below, architect Mike Simpson testifies alongside attorney Ed McKenna. (Rendering by SOME Architects. Photo by John T. Ward. Click to enlarge)

Michael Salerno, who owns the office building at 121 Monmouth Street, plans to knock down that building and several others on Monmouth, Pearl and Oakland streets for the project.

Salerno’s plan, filed with the borough in September, would put 59 rental units and 2,000 square feet of commercial “incubator” space on several lots extending from Monmouth to Oakland streets between the Red Bank Charter School and Pearl Street.

It would also provide onsite parking for tenants, with about 100 spaces. Half would be underground and accessed from Monmouth Street; the rest would be located in a grade-level courtyard not visible from the street and accessed via Pearl Street, architect Mike Simpson of SOME Architects testified.

Borough planner Glenn Carter said he estimates the site will require 125 spaces, though Salerno is not seeking a parking variance at present. Instead, the board’s review covers requested variances for building height; density; floor-area ratio, a measure of footprint coverage; and use.

The use variance would enable the main, five-story building fronting on Monmouth Street to exceed a limit of 16 units per acre allowed by ordinance above commercial uses. Salerno’s project calls for a density of 82 per acre.

If successful at this round, Salerno plans to return to the board to seek site plan approval and any other required variances, said attorney and former mayor Ed McKenna.

Simpson read off a list of projects within a half-mile of the nearby train station for which the zoning board has granted height and/or density variances: the Rail, Station Place, 170 Monmouth, West Side Lofts, 9 Wall Street, 120 Monmouth Street. They’ve been granted density variances ranging from 26.3 to 64 units per acre, Simpson said.

In addition, the borough council “has gone to the extent of creating special redevelopment zones approved by your planning board, at much higher densities than otherwise allowed in your ordinance,” Simpson told the board.

Meantime, he noted, the borough is pursuing a transit village designation with the New Jersey Department of Transportation. Salerno’s property is within 1,000 feet of the station.

“These are the kinds of things that are being encouraged when one approaches a transit village designation,” Simpson said.

The hearing got underway with a signal of possible resistance. Ron Gasiorowski, an attorney with a specialty in representing development objectors, has been engaged by Maureen Grimaldi, owner of the house at 124-126 Monmouth Street, across the street from the Salerno site. Attorney Gordon Gemma subbed for Gasiorowski, who was not present.

Gemma, during cross-examination, elicited from Simpson acknowledgement that since 1995, the council had not changed borough ordinances to implement Master Plan recommendations “such that variance relief would not be needed.”

The master plan, Simpson said, argued that density levels should be increased by the council from 1995 levels, but that the council had not acted on the recommendations.

Gemma also noted that in the “immediate area” of the project, the highest approved density is 64 units per acre, while the Salerno project would increase that by 31 percent.

McKenna drew from Simpson testimony that the master plan and subsequent updates were not specific as to density, floor-area ratio and height, except to say that “five stories is the logical height.”

Other developers “would not have needed variances if, A, the council had acted, and B, there were specific recommendations,” McKenna said.

Though members of the public are usually permitted only to ask questions of witnesses at this point in the hearing, rather than make statements, Charles Kauffman, who owns a property across Monmouth Street from the site, praised the plan as “a great asset” to the town.

Carol Sama of Pearl Street, said that because patrons of the nearby Count Basie Center for the Arts park in the neighborhood, “there are times we can’t get in and out of the driveway.” She questioned the adequacy of the Salerno parking plan.

The hearing was scheduled to continue March 19, when a parking and traffic consultant is expected to testify for Salerno.

Separately, the board unanimously approved a request by Juanito’s Market owner Juan Torres to amend a prior approval by allowing him to create a 49-seat restaurant instead of a laundromat at 191 Shrewsbury Avenue.

The board approved the laundromat in April, 2017, as part of a project that also included four apartments. The building is now under construction.

The change triggered the need for a further parking variance of six spaces, according to the application.