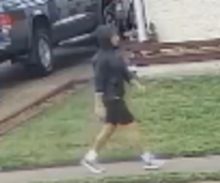 Authorities allege he’s the same guy who knocked a Red Bank jogger to the ground last month, and attacked another in a similar manner five months ago.

The assailant came up from behind the victim at around 8 a.m. on Seven Bridges Road and grabbed her buttocks, Oliva said.

The victim called police immediately and “was able to describe the man in detail,” he said.

Responding patrol officers quickly located and stopped the suspect as he attempted to flee in a vehicle he had parked nearby, Oliva said.

Because the suspect appear to match descriptions of similar incidents that had occurred in Red Bank over the past few months, police in that town were alerted, he said.

As previously reported by redbankgreen, a female jogger was “accosted and knocked to the ground” in the area of McLaren Street and Throckmorton Avenue at around 8:45 a.m. on January 12.

The victim was grabbed in a similar manner to the one in Little Silver, and suffered a minor hand injury, according to Red Bank Chief Darren McConnell.

The assailant was described as wearing black running shorts and a black hoodie with a lime green shirt underneath. Images of the suspect, including the one above, were obtained from nearby residential security systems and shared on social media.

The first of the three assaults occurred on Spring Street in September, McConnell said.

The joint investigation led to Flores, of North Bridge Avenue, being charged with three counts of criminal sexual contact.