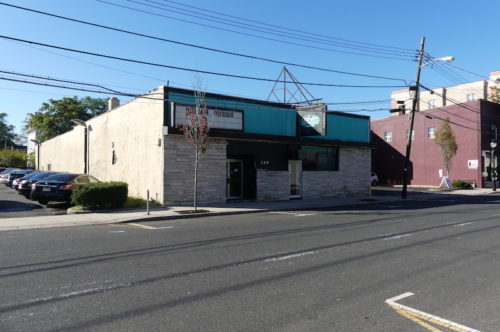 Michael Salerno, who owns the office building at 121 Monmouth Street, plans to knock down that building and several others on Monmouth, Pearl and Oakland streets for his nameless project, if the planning board approves. [See details here.]

Among the buildings facing the wrecking ball is the long-vacant, one-story building at 129 Monmouth, just a bottlecap’s flick from the Count Basie Center for the Arts. In prior incarnations, it had been a grocery store and a shot-and-beer bar, and was last home to a gym.

But for rock fans, it was a briefly a mecca owned by Clemons, then the sax player with Bruce Springsteen and the E Street Band. And the club managed to pack a lot of musical history into just a few years of operation.

According to a Wikipedia entry, the club opened on July 11, 1981, with a concert by the house band, Clarence Clemons & the Red Bank Rockers, who were joined onstage by Springsteen and Gary U.S. Bonds for a set that included “Ramrod,” “Summertime Blues” and “Cadillac Ranch.”

Springsteen would go on to make at least 18 appearances on the club’s stage. Among them was a 1982 show by British rocker Dave Edmunds, whom Springsteen joined for an incandescent string of rockabilly classics complete with dueling guitars.

“It was jaws-on-the-floor stuff. Just amazing,” George McMorrow, the club’s manager, told redbankgreen following Clemons’ death, in 2011. “And that kind of thing was happening all the time.”

Other musicians who played the club included Joe Cocker, Richard Thompson, Bon Jovi, Bonnie Raitt, James Cotton and Roger McGuinn. Crooner Tony Bennett once showed up in a limo to catch a performance of his two sons, who had a rock band.

The club closed in January, 1983 amid “a combination of health and safety regulations and financial difficulties,” the Wikipedia account says. Among the musicians onstage for the final night were Clemons, Springsteen and fellow E Streeters Max Weinberg on drums and Garry Tallent on bass.

In May of 1984, the expansive space served as the rehearsal space for Springsteen and his band’s seminal “Born in the USA” tour.

No planning board hearing date for Salerno’s project has yet been set.