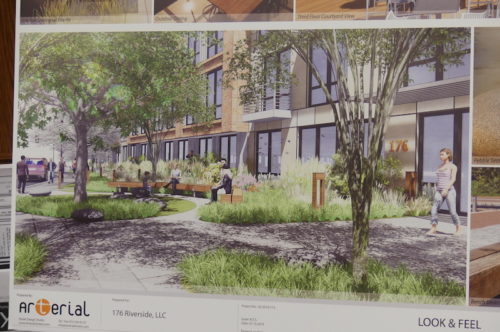 A rendering depicts the proposed plaza at Riverside Avenue and Bodman Place that board members raised safety concerns about. (Rendering by Arterial Photo by John T. Ward. Click to enlarge.)

Red Bank planning board members aired numerous misgivings about one of the largest development plans in borough history Monday night.

High on the list that developer Saxum Real Estate is expected to address: traffic and pedestrian safety issues. 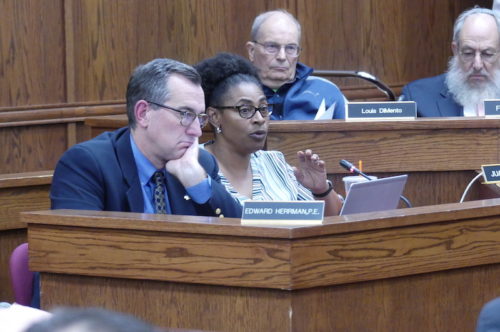 The fifth session on Saxum’s plan to replace the former VNA headquarters at 176 Riverside Avenue with a 210-unit apartment complex ended after two hours without a decision.

Given their first chance to comment on the proposal since the hearing began in July, only four members of the audience, all Bodman Place residents, availed themselves of the opportunity.

Three were critical of the redevelopment agreement regarding the property reached between the borough and Saxum last December, which they said they had not known about at the time.

One, Peter Schkeeper, also told the board that the dead-end street has no place for vehicles to turn around without trespassing onto private property, an issue the Saxum plan does not address, and no provision for emergency vehicles to access the street when the nearest intersection is blocked by traffic, as is frequent.

“A grave disservice has been put on the Bodman Place community,” Schkeeper said. “Bodman Place will not be safe until a traffic control light is installed.” He said the board needs to delay approval until that happens.

Thomas Salmon called the proposal “a monstrosity on two and half acres,” and Maureen Mehl said her greatest fear was a fire.

“If there’s as huge fire at the end of that street, what’s the evacuation plan for us?” she asked. “How do we get out?”

Board members teed up the plan, too. Though Saxum has offered to pay the cost of a formal application to the New Jersey Department of Transportation for a traffic light at Bodman and Riverside, a request the DOT has shot down in the past, Councilman Michael Ballard said the project should not go ahead without it.

“To suggest 210 units will have no impact on traffic is fantasy,” he said. “In good conscience as a councilman, I can’t approve it,” he said, to applause.

“This is a beautiful project,” said former council member Juanita Lewis. “But I have concerns about the quality of life of the people who will be living there, and their safety.”

“We need a light there whether this is built or not,” said Mayor Pasquale Menna. “The visibility there is horrendous.”

Barbara Boas said the plan made no provision for toddlers and other young children to play.

Board member David Cassidy, who praised the project in general, said he didn’t see any evidence of how a plaza proposed for the corner of Riverside and Bodman would be safe, “especially considering there were 10 accidents in three years there.”

The site is on a bend in the roadway that was the scene of a June, 2017 accident in which an SUV plowed into the VNA building.

Lou DiMento said the location of the plaza “just doesn’t make sense,” and should instead be relocated farther north, perhaps to the area of a sycamore tree neighbors have wanted to save.

DiMento also found shortcomings in the plans’s environmentally friendly features, the provision of which are meant to earn Saxum bonus units under the redevelopment agreement. He called the inclusion of a bike rack a “nothingburger,” and criticized the absence of solar power.

Board Chairman Dan Mancuso said he’d also like to see a better version of the public space proposal. He and others appeared surprised to hear Warnken say that he had an alternate plan that he was ready to discuss.

That’s expected to occur when the hearing resumes  November 4.

Meantime, a legal question looms. Attorney Ron Gasiorowski, representing the owners of the Colony House apartment building, whose parking lot would be surrounded by the project, says the proposal violates the agreement negotiated between Saxum and the borough, which limited the redevelopment zone to two driveways on Bodman Place.

Counting his client’s, there would be three, he said. By allowing Saxum to go ahead, “you’re depriving my client of his ability to use” the redevelopment ordinance, he said.

“The language of the redevelopment ordinance is crystal clear,” he said. “I’m saying you don’t have the power” to overrule that. He said the board should ask the borough council what its intent was.

Saxum attorney Chad Warnken replied that his client “doesn’t own or have the ability to acquire” the Colony House property, and should not be barred from pursuing a redevelopment plan on that basis.

“The Colony House can come in with its own plan,” he said.

Moreover, “we substantially comply with” the ordinance, he said, and are seeking “slight deviations” from it.