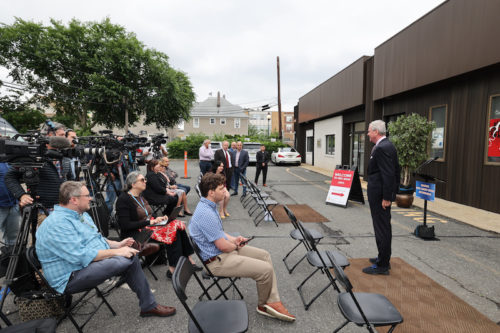 Murphy announced a nine-day tax “holiday,” starting August 27, on school supplies, including laptop computers, at a press conference held on the Reckless Place side of 140-148 Broad Street.

The location is at the rear of an office building slated for remodeling by borough-based Denholtz Properties. Tenants include RiverCenter and an Arthur Murray dance instruction studio.

Murphy, who lives in Middletown, said at the event that he has a private office in Red Bank that he doesn’t often use. He didn’t specify where.

In a statement, Sheila Reynertson, senior policy analyst at New Jersey Policy Perspective, called the tax break “a gimmick that will not provide meaningful relief to working families who need it most.”