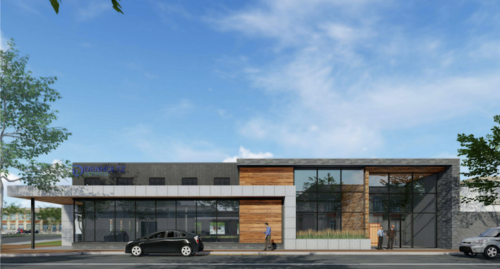 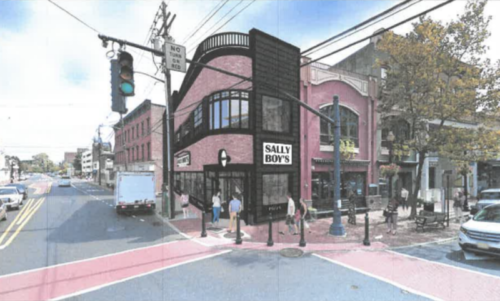 A view of the proposed look for Sally Boy’s, at Broad and East Front streets. (Rendering by Stephen Raciti Architect. Click to enlarge.)

• Denholtz Properties, the developer of the Rail  and Southbank projects now under construction next to the borough train station and overlooking the Navesink River, respectively, plans to make exterior renovations to the office building at 140-148 Broad Street.

The building, which houses a branch of OceanFirst Bank that’s slated to close January 22, is owned by Schiff Real Property of West Long Branch.

Architectural renderings show Denholtz branding on the building, located on the northwest corner at Reckless Place. It was not immediately known if the company plans to buy it and/or relocate its corporate headquarters there, from Chestnut Street.

Also on the HPC agenda:

• Sally Boy’s, a pizza and specialties restaurant planned for the shoehorn-shaped building at 1 Broad Street, is expected to present plans for exterior changes.

Those include the installation of dark gray metal siding panels on both the Broad Street and East Front Street sides of the building. The second-floor dining room will have roll-up garage-style doors, fronted by safety rails, according to architectural plans.

The building was home for many years to Heritage Liquors, and has been vacant since the store closed eight years ago. It was acquired for $1.6 million last September by a limited liability company whose members are Salvatore Basile and David Cantin.

• At 3-5 Broad Street, next door to Sally Boy’s, restaurateur Jack Manousos is following through on an earlier application to show the board a proposed roll-up door. Here are the plans.

The building was formerly home to the Belmonte restaurant and bar.

• Plans by the Dublin House Pub, at 30 Monmouth Street to enclose the front porch and overhead balcony and create a new outdoor bar in the existing front courtyard.

The plan has previously met board resistance.

The meeting, scheduled for 7 p.m. Wednesday, will be conducted via Zoom. Here’s the agenda, with access information and links to key documents.