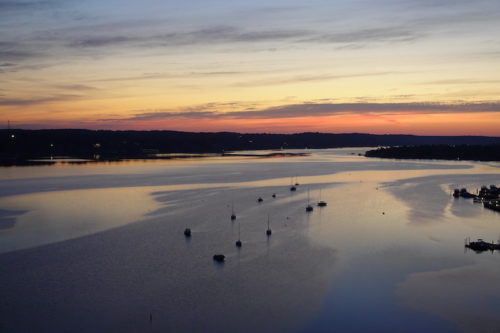 An eastward view of the Navesink River from Red Bank earlier this week. (Reader photo. Click to enlarge.)

The Army Corps of Engineers plans to dredge the Navesink River from Red Bank to Sandy Hook in 2023, according to an announcement by sixth-district Congressman Frank Pallone, Jr.

Pallone said Wednesday that he has secured $26 million for maintenance dredging of the Navesink and Shrewsbury rivers in the Appropriations Subcommittee on Energy and Water Development spending bill. The House is expected to vote on the underlying legislation in the coming months.

Under the plan, the Army Corps of Engineers would dredge the entrance to both rivers at Sandy Hook, as well as the Navesink to Red Bank and the Shrewsbury as far as the Branchport Avenue Bridge in Long Branch – a total of approximately 14 miles, Pallone’s announcement said.

This is the federal channel that covers most of the waterway boaters use.

“New Jersey’s waterways are critical to our state’s recreation and fishing industries. I’ve heard from so many people in the communities along the rivers and the boaters who use the channels regularly about the importance of this project,” Pallone said in the announcement. “The dredging will make the rivers safer and easier to use for them and everyone involved in fishing.”