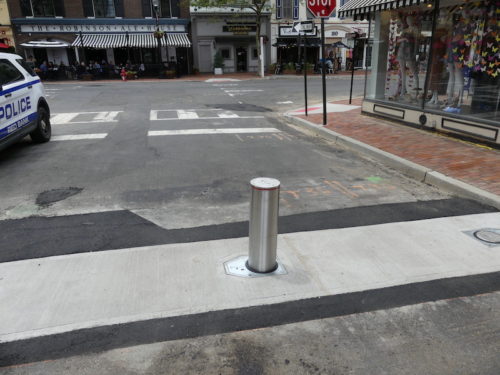 The project, which began last November, marked a milestone with the installation this week of retractable hydraulic bollards that will enable quick closure of the street to vehicular traffic.

Still to be determined is when the Broadwalk dining promenade will return for a third, if abbreviated, season. 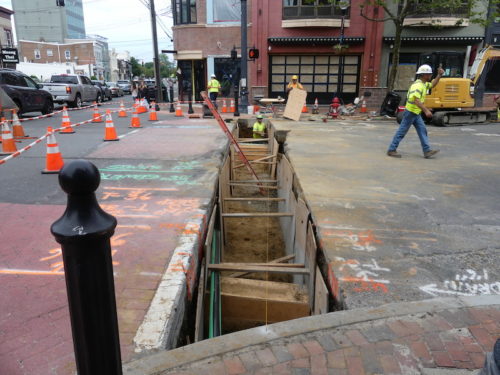 Workers with Montana Construction preparing a trench at Broad and Front streets Thursday for the installation of retractable bollards. Below, public utilities Director Cliff Keen, with a traffic bumpout and planting strip visible behind him. (Photos by John T. Ward. Click to enlarge.) 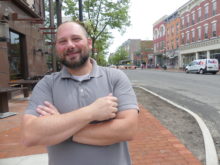 Here are key updates on the $2.7 million project:

• Steel security bollards have been installed in two locations: across Broad Street at White Street, and at the intersection of Broad and Mechanic streets. A final set, at Broad and Front Street, is expected to be in place by the end of next week, McConnell said.

The bollards are locked and unlocked individually; an earlier plan to raise and lower them with an electronic switch was dropped over concerns about costs, public utilities Director Cliff Keen told redbankgreen Thursday.

The devices will enable the borough to easily halt vehicular traffic on Broad Street between White and Front streets for future editions of Broadwalk, as well as for special events, without having to haul concrete barriers in and out with heavy equipment.

• Milling and paving of Broad Street is expected to begin July 18 and take several days, McConnell said. The work may be done at night, he said.

The additional landscaping, which includes planting strips situated in new, traffic-calming sidewalk bumpouts, is “going to take some maintenance,” McConnell acknowledged. He said he saw tire tracks in one at the intersection of Broad and White streets when he parked there last week.

But once road markings, trash receptacles and benches are in place, “we’re hoping that won’t be an issue any more,” he said.

Keen said a borough public works employee will be assigned to water and maintain the landscaping.

“Between us and RiverCenter, we’ll make sure it’s maintained correctly,” Keen said.

• The existing light poles were kept, but all the heads have been replaced with LED fixtures that “give a cleaner look” with downward-directed light, Keen said.

• When Broadwalk will return, and how many restaurants will participate in the shortened season, remains to be determined. Councilman Ed Zipprich said he and McConnell had met recently with Red Bank RiverCenter about “the upcoming Broadwalk, which of course will be forthcoming once the construction is finished next month.”

A community roundtable at borough hall on the topic is to be scheduled for next week, Zipprich said. McConnell said the discussion is expected to include fees for streateries outside the Broadwalk zone. UPDATE: The event has now been slated for Wednesday, June 29, at 6 p.m. It will be both in-person and online. Access information can be found here.