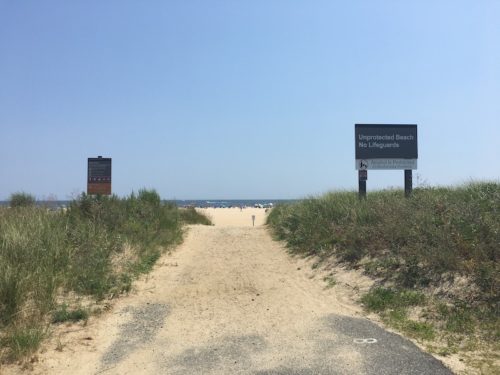 Music-lovers may have had to sacrifice their summer beach concerts at Sandy Hook this year to safeguard piping plovers, but the interruption helped ensure “another successful breeding season” for the endangered birds, park officials said Monday. An adult piping plover. (Photos by John T. Ward, top, and Cornell Lab of Ornithology, above. Click to enlarge.)

In 2018, of the 145 plover chicks that fledged in New Jersey, 59 were from nests at Sandy Hook, which “has consistently supported 40-50 % of the N.J. nesting plover pairs” over the past decade, the park service said in its announcement.

In June, NPS and the Sandy Hook Foundation announced the cancellation of this year’s Wednesday-night summer concert series, citing a need to protect the nesting areas of the plovers from noise and human intrusion.

The birds  have been on the federal endangered species list since 1986.