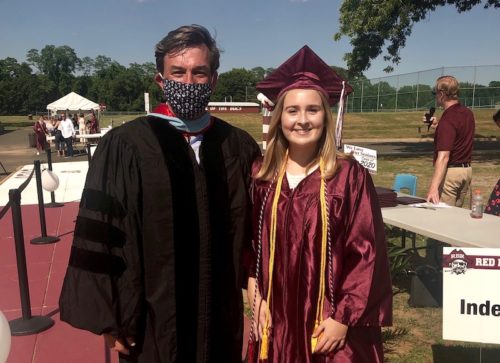 The unidentified student “potentially had exposure to a number of classmates,” Superintendent Lou Moore and Principal Julius Clark wrote in an announcement to the school community.

“Based on consultation with the Monmouth County Regional Health Commission and local authorities,” the in-person commencement has been canceled, they wrote.

“Although disappointing, we must continue to prioritize the health and safety of our students and staff,” the notice said.

The commencement was to have been a seniors-only, outdoor event for the 321 members of the class of 2020.

The school was the first in New Jersey to close, in March, for what was intended as a “deep cleaning” after a student from Little Silver tested positive for the virus.

But the school never reopened, and widespread school closures followed across New Jersey as Governor Phil Murphy ordered near-lockdowns of the economy and social life.

Since then, the state has had 13,613 confirmed COVID-19-related deaths, and another 1,947 “probable” deaths from the virus, account to the state Health Department.

The rates of new cases and deaths have fallen steadily since peaking in early April, however. Elsewhere in the United States, case numbers have been soaring in recent weeks.

In RBR’s three sending districts, Monmouth County officials reported that as of Monday, there had been a cumulative 40 positive tests in Little Silver, 268 in Red Bank, and 63 in Shrewsbury.

Tuesday’s announcement informed seniors when they could pick up their yearbooks.