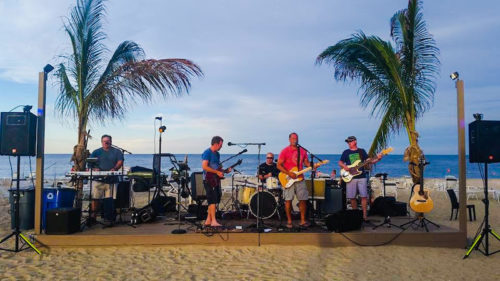 Local favorites the Haven, above, and the Nerds, below, will also perform. (Photo below by John T. Ward. Click to enlarge.) As reported by redbankgreen, the nonprofit rescheduled its International Beer, Wine & Food Fest, usually held in April in the White Street parking lot, to October 18 because of the COVID-19 pandemic.

That set up the long-odds possibility of two signature food fests in the same location just three weeks apart, with the fall kickoff Guinness Oyster Festival slated for September 27.

Now, however, both have been nixed, RiverCenter executive director Laura Kirkpatrick told redbankgreen Thursday. She attributed the cancellations more to the challenge of keeping thousands of festivalgoers socially distanced than the fact that the parking lot is being rebuilt and won’t be completed in time for at least the first of the dates.

“We just didn’t think we could safely offer those events,” she said.

Instead, the agency will host two Saturdays of concerts, with three separate acts – and three separate paying audiences – on each day in Riverside Gardens Park.

Tickets, available only in advance and only in groups of four, are priced at $29.95 per person through 10 p.m. Saturday, September 12. The prices rises to $39.95 per person afterward.

The price includes a “snack pack” for each ticketholder; soft drinks and alcoholic beverages will be available for purchase onsite.

Kirkpatrick said she expects each show, limited to 396 seats, will sell out.

To comply with pandemic-driven requirements, seating will be provided, with chairs arranged on a grid, in rows separated by eight feet, Kirkpatrick said. Seats will be disinfected after each performance. Restrooms will be available, and anyone entering one must wear a face covering.

“We will have a continuous bathroom attendant sanitizing during and between shows,” RiverCenter said in an announcement on its website.

RiverCenter will pay the town $500 per day to rent the riverfront park, with the funds used to support parks and recreation, in accord with state Green Acres funding rules, Shehady said.

While unusual, use of the riverfront park for paid events is not unheard of. Organizers of the Kaboom fireworks rented the park for exclusive seating in 2011, said Clerk Pam Borghi.

Proceeds from the concerts will benefit RiverCenter, which typically earns $20,000 from each of its two annual food festivals, after donations to select local charities.

But it’s not about the money, Kirkpatrick said.

“Our focus is really to bring back live music and to remind people that Red Bank is a safe arts destination,” she said.

Red Bank restaurants and shops will offer discounts for ticket holders, she added.

Really Unbelieveable Events, which produces the food fests, is also producing the concerts.