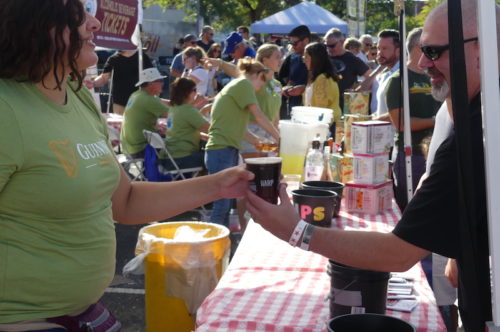 With a calendar decimated by the COVID-19 crisis, Red Bank appears to be in for an unusually quiet summer.

But as summer edges into autumn, two of the town’s largest annual food festivals could occur within three weeks of one another, redbankgreen has learned.

Here’s a lookahead at the pandemic’s impacts on the summer calendar. The mid-summer concert by the New Jersey Symphony Orchestra in Marine Park has been cancelled. Below, Governor and First Lady Phil and Tammy Murphy finishing the Red Bank 5K Classic in 2018; this year’s edition has been rescheduled for October 10. (Photos by John T. Ward. Click to enlarge.) 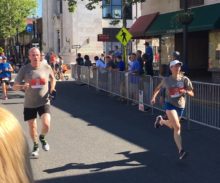 • The International Beer, Wine & Food Fest, held annually in April in the White Street parking lot, was of course cancelled this year because of the health crisis.

But sponsor Red Bank RiverCenter is working toward a possible revival of the event on October 18 – just three weeks after the annual Guinness Oyster Festival, a fall-kickoff staple held in the same place, featuring many of the same vendors.

The pairing is not yet a certainty, RiverCenter executive director Laura Kirkpatrick told redbankgreen.

“We wanted to secure a date” on the borough calendar if the stars align to allow for both, she said.

Whether one or both events occur “is going to depend where we are with the reopening process, social distancing requirements and more,” she said.

Having both dates approved by the town’s special events committee also means that the September 27 Guinness fest can be “slid” to the October 18 slot if necessary, she said.

The festivals, featuring live music on two stages and tons of food and beverages, are fundraisers that draw thousands of visitors to town and each put close to $20,000 into the coffers of the nonprofit downtown promotion agency.

“It’s important that we hold them if we can,” Kirkpatrick said. “It’ll have a great impact if we’re unable to do our festivals.”

Another variable in the mix is the status of two major, interlocking construction projects: a planned streetscape makeover for White Street and a reconfiguration and repaving of the 273-space parking lot where the festivals are held.

But the staging of the work does not appear to conflict with the festival schedule, Kirkpatrick said.

“The borough’s intent is for the work to be substantially complete by mid-September,” she said, noting that last fall’s Guinness fest went off without a hitch as the nearby English Plaza and eastern White Street makeover was wrapping up.

The 2019 edition of the international food event was also canceled, that time because of bad weather.

• The ‘Dog Days of Summer‘ event scheduled for June in Marine Park has been cancelled.

Tentative plans call for a September 12 event date, though that has not year been nailed down, said Councilman Michael Ballard, the council’s liaison to the Animal Welfare Committee.

Race registrations have automatically been deferred to the new date. Runners who have a conflict can defer their registration to 2021, transfer their bib to another runner, or convert their registration fee to a donation that will support race benefactors the Red Bank Family YMCA and Department of Parks and Recreation.

• What would have been the fourth annual New Jersey Symphony Orchestra concert in Marine Park has been cancelled for the year.

The sunset concert, which has landed near the Fourth of July in its first three years, will again be held near but not on the holiday itself in 2021 if plans work out, Kirkpatrick said. [CORRECTION: The original version of this post mistakenly reported that the 2021 concert might be held on July 4.]

• The annual Sidewalk Sale is still on, “again, depending on where we are” under Governor Phil Murphy’s plans for a staged reopening of the state’s economy, Kirpatrick said.

The event is scheduled for July 24 through July 26.

• The annual Parks & Rec movies, concerts and fitness events in Riverside Gardens Park are on hold.

“At this point, we have not made any official decisions regarding the summer series,” department Director Charlie Hoffmann told redbankgreen. “We are monitoring the guidelines closely from the Governor. We will do our best to implement as many concerts, movies and fitness classes, as long as we could do it safely.  That may include doing them later in the year (perhaps even a Halloween movie). “
• The fall StreetFair fundraiser for the volunteer fire department is on the calendar for September 13.
Posted on May 29, 2020 at 11:00 am, filed under Charity, Entertainment, Featured, Festivals, Food and Drink, Music, RED BANK and tagged 202o, autumn, covid-19, dog days of summer, fall, festival, guinness, guinness oyster fest, international beer wine and food fest, jazz in the park, laura kirkpatrick., movies in the park, nj, oyster, oysterfest, pandemic 2020, red bank, red bank classic 5k, RiverCenter, sidewalk sale, white street. Bookmark the permalink. Follow any comments here with the RSS feed for this post. Trackbacks are closed, but you can post a comment. Email this story.
PREVIOUS: VIRUS UPDATE: COUNTY SEES 97 NEW CASES NEXT: VIRUS UPDATE: RED BANK CASES LEVELING