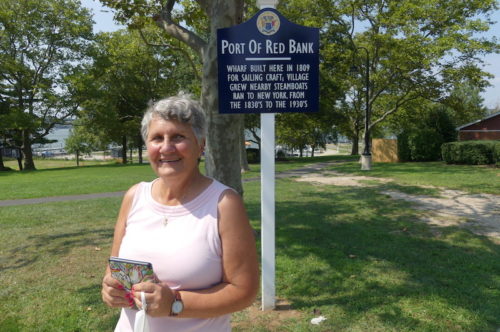 But Marjorie Cavalier, who pushed for replacement of the illegible ‘Port of Red Bank’ sign, isn’t finished. She’s now turned her attention to development of an app to help illuminate borough’s past. Back in January, Cavalier, of Bridge Avenue, asked the borough council to consider creating a “formalized walking trail” to highlight historic places in town. As reported by redbankgreen, Mayor Pasquale Menna told Cavalier he’d like to meet with her to discuss the idea.

A month later, Cavalier met with Menna at the first of his now-paused ‘Mayor’s Focus’ opportunities for residents and business owners to speak with him one-on-one in his borough hall office. Among the concerns she raised with Menna was a deteriorating sign marking the Port of Red Bank in Marine Park.

Last month, Cavalier was out walking with her husband when they came upon the replacement, which was worded exactly as the original, even down to the grammatically incorrect apostrophes used in the dates.

“I would have edited it,” said Cavalier, who taught English and social studies in the in the Monmouth County Vocational school district before her retirement in 2019. “You’re talking about decades, not adjectives.”

Still, “I’m really happy that they listened,” she said. Seeing the new marker was “very gratifying,” she said.

(Borough Business Administrator Ziad Shehady said he decided to maintain the exact wording and punctuation so as not to run into conflict with whatever agency or organization might have been originally been responsible for it.)

Cavalier said she spends a lot of time walking, but “I don’t just walk past things,” she said. When she sees plaques or historical markers, “I stop and read them, and say what is the significance?”

But there aren’t many in Red Bank, and her campaign for the sign “was the spark,” she said, for her current endeavor: the creation of a mobile app that would alert users when they’re near places of historical significance in town.

She’s teamed up with the Monmouth County High Tech High School on the Brookdale Community College campus in Lincroft, where seniors are required to apply their learning to  real-world needs.

This semester, three students will be doing preliminary work on a mobile app. And while she’s leaving it to them to decide what approach to take, Cavalier asked that in version 1.0, it focus on the people, including natives and immigrants, and their livelihoods.

“When I first presented the idea to the town, the mayor said, “you know, there’s a lot of Native American history here. Could that be incorporated?'”

For example, she sees value in calling out the origins of Chestnut Street. It’s named not for one chestnut tree, but for a grove of them, she said.

“It’s hardwood, which is ideal for making furniture,” Cavalier said. Like the oysters harvested along what’s now called the Navesink River, the wood was a resource exported through the port, contributing to the town’s economic growth, she said.

Early in the 20th century, a blight all but wiped out the chestnuts, “and the town named the street in memoriam to the trees,” she said.

Cavalier, a volunteer at the T. Thomas Fortune Foundation, also hopes to spotlight the 16 locations in town she’s counted that have some connection to bandleader and composer William ‘Count’ Basie, who grew up at the 229 Mechanic Street.

In fact, one is just steps from Marine Park: the former Palace Theater, on East Front Street. There, as a teenaged helper, Basie played piano to accompany silent film screenings, according to a history on the website of the Count Basie Theatre on Monmouth Street.

The aim, she said, is to help local residents and visitors forge a connection to the past.

“We always should be learning; we should be lifelong learners,” said Cavalier. “But some of us just can’t give up the teaching side.”