A Halloween image painted by Markham Place School students on a Prospect Avenue window in 2017. (Photo by John T. Ward. Click to enlarge.)

For more than an hour, Little Silver officials and residents wrestled Monday night with how to safely pull off Halloween in a pandemic.

Without being buzzkills, that is – particularly to residents of one neighborhood where the holiday has become something of a communal party. 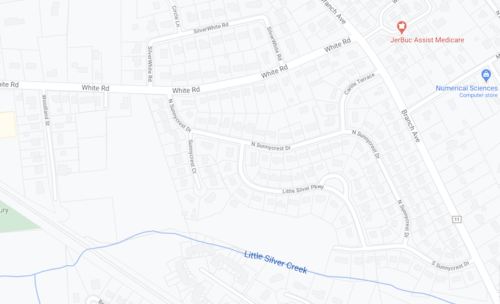 The streets around Sunnycrest Drive often draw hundreds of trick-or-treaters, some from out of town, residents said. (Google Map. Click to enlarge.)

This year’s Halloween, occurring during the COVID-19 pandemic, won’t be “business as usual,” Mayor Bob Neff said during the council’s semimonthly session, conducted via Zoom.

“There will be trick-or-treating, but it will be in a much modified form,” said Neff.

Neff said the borough would encourage adherence to guidelines issued earlier in the day by the New Jersey Department of Health. They include “staying local” when trick-or-treating, and limiting the number of homes visited.

“Recognize there are people who are high-risk, or may be COVID-19 positive,” said Neff. “Trick-or-treat where you know it’s safe and welcome.”

Dominating the discussion, however, was what, if anything, to do about the Sunnycrest Drive neighborhood.

In recent years, Halloween has grown to be such a draw on Sunnycrest and surrounding streets that police began limiting vehicular access to the neighborhood from its main access points, on White Road and Branch Avenue.

Still, trick-or-treaters from throughout the borough and beyond would go door-to-door, and families would host gatherings around fire pits well into the night.

Though Halloween falls on a Saturday this year, the Sunnycrest neighborhood won’t be closed off, in an effort “to prevent large-scale block parties,” said Neff, following a recommendation by police Chief Dan Shaffery.

Shaffery said police would be on the scene, either on foot, bicycle or in vehicles.

Neff said that if people follow the state guidelines, the throngs won’t materialize.

But Rachael Rennert, a Sunnycrest resident for 13 years, said the borough needs to make an extra effort to get the word out.

When she first moved in, entry to the neighborhood was not restricted by police on Halloween, and “hundreds and hundreds” of trick-or-treaters would wend through the streets, Rennert said. But in the last five years, with police limiting vehicular access, the number has grown to “thousands,” she said.

Rennert said that simply asking trick-or-treaters to stick to their own neighborhoods is not enough.

“You guys know very well that’s not going to happen,” she said. “Every year it gets worse and worse, and there’s nothing about not blocking the streets off that leads me to believe people aren’t coming.”

Borough resident Bonnie Akey said it was “inevitable” that people will congregate there unless the council sets a curfew of around 7 p.m.

Winding Way resident Deborah DiMicelli argued for limiting trick-or-treating throughout town  to between 4 and 7 p.m.

“That way, kids can proceed cautiously and everybody in the town will know,” she said. “We’ll be able to see each other.”

But Neff and several council members expressed hope that common sense and respect for pandemic safety measures will combine to keep turnout down, groups well spaced, and everything will wrap up earlier than usual.

By informal consensus, the council agreed not to change the customary 8:30 p.m Halloween. Making it earlier would constitute “overreach,” said Councilman Chris Smith.

“If the kids listen to their parents, and their parents read the guidelines, we’re going to have a safe Halloween,” Smith said. “I think we’re making it more of an issue than it’s going to be.”

Neff cautioned that the issue is a “fluid situation” subject to change if the number of infections appears to rise. he said he expects the issue to be discussed again at the next council session, on October 19.

In the interim, Administrator Kim Jungfer said she would post printable versions of signs to indicate household participation or non-participation on the borough website, and Shaffery said he would also send them out to residents via the borough’s Code Red notification system.