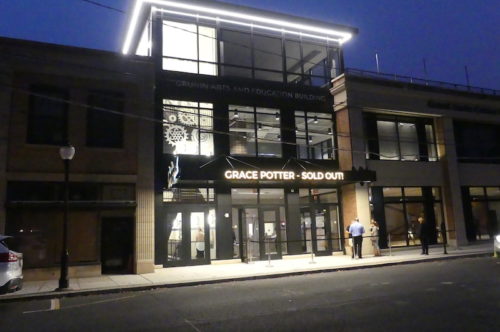 The Count Basie Center for the Arts in Red Bank raised the curtain on its new performance space, called The Vogel, with a concert by singer/guitarist Grace Potter Thursday night. 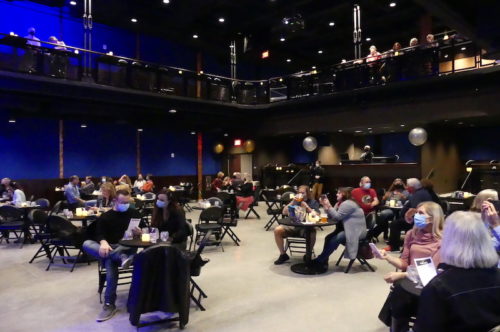 The concert, the first of a two-night, three-show stand by Grace Potter, was sold out. (Photos by John T. Ward. Click to enlarge.)

As previously reported, the floor and balcony of the new theater can accommodate 800 patrons, but under pandemic strictures is allowing only 150 patrons per show, seated in groups of up to six at well-spaced tables.

The concert was the first since the start of the COVID-19 pandemic shut down all Basie performances in March. It was also the first since completion of construction that turned the 1,500-seat Monmouth Street venue into a $25 million performing arts “campus” spanning most of the block between Maple Avenue and Pearl Street.

After all that, the opening “feels like a small step on a long road to recovery,” Basie CEO Adam Philipson told redbankgreen as patrons were temperature-checked before being allowed inside.

Among the early arrivals were Elisabeth and Joel Mikulyak of Red Bank, seated with friends at a table 12 feet from the stage. “It’s just nice to be able to do something like this again,” said Elisabeth.

Joel Mikulyak plans to return next week, but will be on stage: he’s a trombonist with Brian Kirk & the Jirks, slated to rock the room October 29.

In another apparent first, the Basie announced Thursday that it had become “one of the first performing arts organizations in the world to accept gifts of cryptocurrency,” such as Bitcoin and and Ether.

E-cash donations will help the Basie weather the pandemic, the Basie said in the announcement. And there’s an added bonus for cryptodonors: “Because the IRS treats cryptocurrency like property, holders of the digital currency enjoy a huge tax incentive by donating to the nonprofit Basie – specifically, not being liable for capital gains tax and writing if off on their taxes, much like a stock donation,” the announcement said.

Posted on October 22, 2020 at 8:40 pm, filed under Art, Entertainment, Featured, Music, Night Life, RED BANK and tagged adam philipson, bitcoin, brian kirk & the jirks, count basie center for the arts, cryptocurrency, dead on live, grace potter, nj, red bank, the vogel. Bookmark the permalink. Follow any comments here with the RSS feed for this post. Trackbacks are closed, but you can post a comment. Email this story.
PREVIOUS: RED BANK: BREAD-BASED CAFÉ TO OPEN NEXT: RED BANK: POOL CASE ENDS IN A RIPPLE