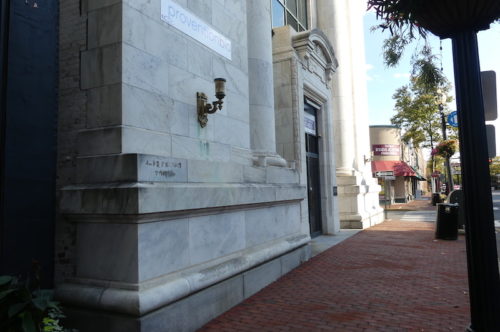 It’s easy to miss, but there’s a new sign on the facade of 55 Broad Street in Red Bank.

‘Provention Bio’ says the marker, installed without fanfare on the building its owner/developer has dubbed ‘The Vault.’ 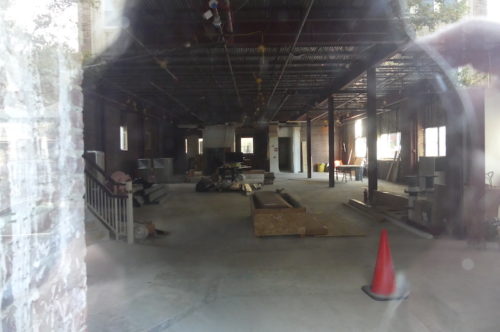 A view of the first floor through the front door. (Photo by John T. Ward. Click to enlarge.)

In a filing with the federal Securities and Exchange Commission in March,  Provention Bio, a biotech company is working on drugs to treat autoimmune diseases, listed its address as a post office box in Oldwick.

“We are a virtual company and do not own or lease any office space,” it said at the time.

It’s anybody’s guess which will come first: its new office space or an approval by the Food and Drug Administration.

The building is owned by Saxum Real Estate, which acquired the circa-1914 bank building almost four years ago for $4 million, and then gutted its rain-damaged interior. It’s been vacant for at least eight years.

Saxum leasing director Matt Wassel told redbankgreen Monday that the firm is “expecting three large tenants, Provention included. We are in the process of completing significant base building improvements, expecting delivery in Q1 2021.”

That sounds… ambitious. A peek through the front door indicates there’s lots of work to be done in the down-to-the-bricks-and-beams interior.

Here’s some history on 55 Broad.

Saxum, based in Parsippany, also owns the former site of the Visiting Nurse Association headquarters on Riverside Avenue, where it won approval last December for a 210-apartment residential project. Construction has not yet begun.

The firm also owns the building that houses an Urban Outfitters store at 2-10 Broad Street.

Twitter
Posted on October 6, 2020 at 5:45 pm, filed under Featured, Health, Land Use & Zoning, Real Estate, RED BANK, What's Going On Here? and tagged Housing, land use, nj, planning, provention bio, red bank, saxum, the vault, visiting nurse association, vna, what's going on here. Bookmark the permalink. Follow any comments here with the RSS feed for this post. Trackbacks are closed, but you can post a comment. Email this story.
PREVIOUS: RED BANK: RESOURCE CENTER REOPENS NEXT: ON THE GREEN: A WARM AND WINDY DAY